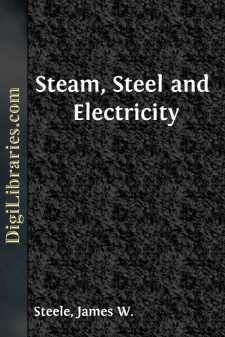 THE STORY OF STEAM

That which was utterly unknown to the most splendid civilizations of the past is in our time the chief power of civilization, daily engaged in making that history of a new era that is yet to be written in words. It has been demonstrated long since that men's lives are to be influenced not by theory, or belief, or argument and reason, so much as by that course of daily life which is not attempted to be governed by argument and reason, but by great physical facts like steam, electricity and machinery in their present applications.

The greatest of these facts of the present civilization are expressed in the phrase, Steam and Steel. The theme is stupendous. Only the most prominent of its facts can be given in small space, and those only in outline. The subject is also old, yet to every boy it must be told again, and the most ordinary intelligence must have some desire to know the secrets, if such they are, of that which is unquestionably the greatest force that ever yielded to the audacity of humanity. It is now of little avail to know that all the records that men revere, all the great epics of the world, were written in the absence of the characteristic forces of modern life. A thousand generations had lived and died, an immense volume of history had been enacted, the heroes of all the ages, and almost those of our own time, had fulfilled their destinies and passed away, before it came about that a mere physical fact should fill a larger place in our lives than all examples, and that the evanescent vapor which we call steam should change daily, and effectively, the courses and modes of human action, and erect life upon another plane.

It may seem not a little absurd to inquire now "what is steam?" Everybody knows the answer. The non-technical reader knows that it is that vapor which, for instance, pervades the kitchen, which issues from every cooking vessel and waste-pipe, and is always white and visible, and moist and warm. We may best understand an answer to the question, perhaps, by remembering that steam is one of the three natural conditions of water: ice, fluid water, and steam. One or the other of these conditions always exists, and always under two others: pressure and heat. When the air around water reaches the temperature of thirty-two degrees by the scale of Fahrenheit, or ° or zero by the Centigrade scale, and is exposed to this temperature for a time, it becomes ice. At two hundred and twelve degrees Fahrenheit it becomes steam. Between these two temperatures it is water. But the change to steam which is so rapid and visible at the temperature above mentioned is taking place slowly all the time when water, in any situation, is exposed to the air. As the temperature rises the change becomes more rapid. The steam-making of the arts is merely that of all nature, hastened artificially and intentionally.

The element of pressure, mentioned above, enters into the proposition because water boils at a lower temperature, with less heat, when the weight of the atmosphere is less than normal, as it is at great elevations, and on days when, as we now express it, there is a low barometer....