Steam, Its Generation and Use 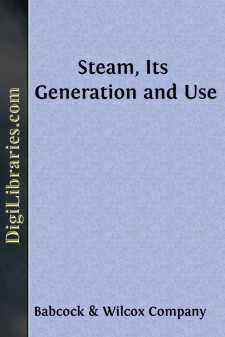 THE EARLY HISTORY OF THE GENERATION AND USE OF STEAM

While the time of man's first knowledge and use of the expansive force of the vapor of water is unknown, records show that such knowledge existed earlier than 150 B. C. In a treatise of about that time entitled "Pneumatica", Hero, of Alexander, described not only existing devices of his predecessors and contemporaries but also an invention of his own which utilized the expansive force of steam for raising water above its natural level. He clearly describes three methods in which steam might be used directly as a motive of power; raising water by its elasticity, elevating a weight by its expansive power and producing a rotary motion by its reaction on the atmosphere. The third method, which is known as "Hero's engine", is described as a hollow sphere supported over a caldron or boiler by two trunnions, one of which was hollow, and connected the interior of the sphere with the steam space of the caldron. Two pipes, open at the ends and bent at right angles, were inserted at opposite poles of the sphere, forming a connection between the caldron and the atmosphere. Heat being applied to the caldron, the steam generated passed through the hollow trunnion to the sphere and thence into the atmosphere through the two pipes. By the reaction incidental to its escape through these pipes, the sphere was caused to rotate and here is the primitive steam reaction turbine.

Hero makes no suggestions as to application of any of the devices he describes to a useful purpose. From the time of Hero until the late sixteenth and early seventeenth centuries, there is no record of progress, though evidence is found that such devices as were described by Hero were sometimes used for trivial purposes, the blowing of an organ or the turning of a skillet.

To the next contributor, Edward Somerset, second Marquis of Worcester, is apparently due the credit of proposing, if not of making, the first useful steam engine. In the "Century of Scantlings and Inventions", published in London in 1663, he describes devices showing that he had in mind the raising of water not only by forcing it from two receivers by direct steam pressure but also for some sort of reciprocating piston actuating one end of a lever, the other operating a pump. His descriptions are rather obscure and no drawings are extant so that it is difficult to say whether there were any distinctly novel features to his devices aside from the double action. While there is no direct authentic record that any of the devices he described were actually constructed, it is claimed by many that he really built and operated a steam engine containing pistons.

In 1675, Sir Samuel Moreland was decorated by King Charles II, for a demonstration of "a certain powerful machine to raise water." Though there appears to be no record of the design of this machine, the mathematical dictionary, published in 1822, credits Moreland with the first account of a steam engine, on which subject he wrote a treatise that is still preserved in the British Museum....