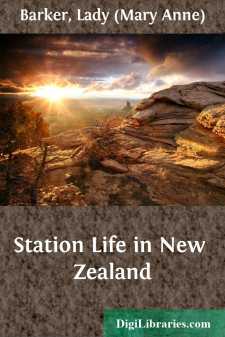 Letter I: Two months at sea—Melbourne.

Port Phillip Hotel, Melbourne. September 22d, 1865. .... Now I must give you an account of our voyage: it has been a very quick one for the immense distance traversed, sometimes under canvas, but generally steaming. We saw no land between the Lizard and Cape Otway light—that is, for fifty-seven days: and oh, the monotony of that time!—the monotony of it! Our decks were so crowded that we divided our walking hours, in order that each set of passengers might have space to move about; for if every one had taken it into their heads to exercise themselves at the same time, we could hardly have exceeded the fisherman's definition of a walk, "two steps and overboard." I am ashamed to say I was more or less ill all the way, but, fortunately, F—— was not, and I rejoiced at this from the most selfish motives, as he was able to take care of me. I find that sea-sickness develops the worst part of one's character with startling rapidity, and, as far as I am concerned, I look back with self-abasement upon my callous indifference to the sufferings of others, and apathetic absorption in my individual misery.

Until we had fairly embarked, the well-meaning but ignorant among our friends constantly assured us, with an air of conviction as to the truth and wisdom of their words, that we were going at the very best season of the year; but as soon as we could gather the opinions of those in authority on board, it gradually leaked out that we really had fallen upon quite a wrong time for such a voyage, for we very soon found ourselves in the tropics during their hottest month (early in August), and after having been nearly roasted for three weeks, we plunged abruptly into mid-winter, or at all events very early spring, off the Cape of Good Hope, and went through a season of bitterly cold weather, with three heavy gales. I pitied the poor sailors from the bottom of my heart, at their work all night on decks slippery with ice, and pulling at ropes so frozen that it was almost impossible to bend them; but, thank God, there were no casualties among the men. The last gale was the most severe; they said it was the tail of a cyclone. One is apt on land to regard such phrases as the "shriek of the storm," or "the roar of the waves," as poetical hyperboles; whereas they are very literal and expressive renderings of the sounds of horror incessant throughout a gale at sea. Our cabin, though very nice and comfortable in other respects, possessed an extraordinary attraction for any stray wave which might be wandering about the saloon: once or twice I have been in the cuddy when a sea found its way down the companion, and I have watched with horrible anxiety a ton or so of water hesitating which cabin it should enter and deluge, and it always seemed to choose ours. All these miseries appear now, after even a few days of the blessed land, to belong to a distant past; but I feel inclined to lay my pen down and have a hearty laugh at the recollection of one cold night, when a heavy "thud" burst open our cabin door, and washed out all the stray parcels, boots, etc., from the corners in which the rolling of the ship had previously bestowed them....