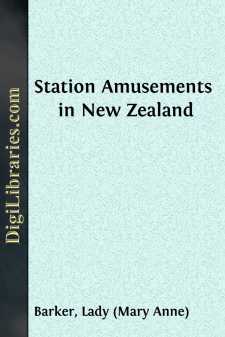 Chapter I: A Bush picnic.

Since my return to England, two years ago, I have been frequently asked by my friends and acquaintances, "How did you amuse yourself up at the station?" I am generally tempted to reply, "We were all too busy to need amusement;" but when I come to think the matter over calmly and dispassionately, I find that a great many of our occupations may be classed under the head of play rather than work. But that would hardly give a fair idea of our lives there, either. It would be more correct to say perhaps, that most of our simple pleasures were composed of a solid layer of usefulness underneath the froth of fun and frolic. I purpose therefore in these sketches to describe some of the pursuits which afforded us a keen enjoyment at the time,—an enjoyment arising from perfect health, simple tastes, and an exquisite climate.

It will be as well to begin with the description of one of the picnics, which were favourite amusements in our home, nestled in a valley of the Malvern Hills of Canterbury. These hills are of a very respectable height, and constitute in fact the lowest slopes of the great Southern Alps, which rise to snow-clad peaks behind them. Our little wooden homestead stood at the head of a sunny, sheltered valley, and around it we could see the hills gradually rolling into downs, which in their turn were smoothed out, some ten or twelve miles off, into the dead level of the plains. The only drawback to the picturesque beauty of these lower ranges is the absence of forest, or as it is called there, bush. Behind the Malvern Hills, where they begin to rise into steeper ascents, lies many and many a mile of bush-clad mountain, making deep blue shadows when the setting sun brings the grand Alpine range into sharp white outline against the background of dazzling Italian sky. But just here, where my beloved antipodean home stood, we had no trees whatever, except those which we had planted ourselves, and whose growth we watched with eager interest. I dwell a little upon this point, to try to convey to any one who may glance at these pages, how we all,—dwellers among tree-less hills as we were,—longed and pined for the sights and sounds of a "bush."

Quite out of view from the house or garden, and about seven miles away, lay a mountain pass, or saddle, over a range, which was densely wooded, and from whose highest peak we could see a wide extent of timbered country. Often in our evening rides we have gone round by that saddle, in spite of a break-neck track and quicksands and bogs, just to satisfy our constant longing for green leaves, waving branches, and the twitter of birds. Whenever any wood was wanted for building a stockyard, or slabbing a well, or making a post-and-rail fence around a new paddock, we were obliged to take out a Government license to cut wood in this splendid bush. Armed with the necessary document the next step was to engage "bushmen," or woodcutters by profession, who felled and cut the timber into the proper lengths, and stacked it neatly in a clearing, where it could get dry and seasoned....