State of the Union Addresses of John Quincy Adams 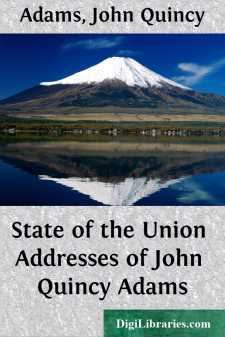 Fellow Citizens of the Senate and of the House of Representatives:

In taking a general survey of the concerns of our beloved country, with reference to subjects interesting to the common welfare, the first sentiment which impresses itself upon the mind is of gratitude to the Omnipotent Disposer of All Good for the continuance of the signal blessings of His providence, and especially for that health which to an unusual extent has prevailed within our borders, and for that abundance which in the vicissitudes of the seasons has been scattered with profusion over our land. Nor ought we less to ascribe to Him the glory that we are permitted to enjoy the bounties of His hand in peace and tranquillity—in peace with all the other nations of the earth, in tranquillity among our selves. There has, indeed, rarely been a period in the history of civilized man in which the general condition of the Christian nations has been marked so extensively by peace and prosperity.

Europe, with a few partial and unhappy exceptions, has enjoyed ten years of peace, during which all her Governments, what ever the theory of their constitutions may have been, are successively taught to feel that the end of their institution is the happiness of the people, and that the exercise of power among men can be justified only by the blessings it confers upon those over whom it is extended.

During the same period our intercourse with all those nations has been pacific and friendly; it so continues. Since the close of your last session no material variation has occurred in our relations with any one of them. In the commercial and navigation system of Great Britain important changes of municipal regulation have recently been sanctioned by acts of Parliament, the effect of which upon the interests of other nations, and particularly upon ours, has not yet been fully developed. In the recent renewal of the diplomatic missions on both sides between the two Governments assurances have been given and received of the continuance and increase of the mutual confidence and cordiality by which the adjustment of many points of difference had already been effected, and which affords the surest pledge for the ultimate satisfactory adjustment of those which still remain open or may hereafter arise.

The policy of the United States in their commercial intercourse with other nations has always been of the most liberal character. In the mutual exchange of their respective productions they have abstained altogether from prohibitions; they have interdicted themselves the power of laying taxes upon exports, and when ever they have favored their own shipping by special preferences or exclusive privileges in their own ports it has been only with a view to countervail similar favors and exclusions granted by the nations with whom we have been engaged in traffic to their own people or shipping, and to the disadvantage of ours. Immediately after the close of the last war a proposal was fairly made by the act of Congress of March 3rd, 1815, to all the maritime nations to lay aside the system of retaliating restrictions and exclusions, and to place the shipping of both parties to the common trade on a footing of equality in respect to the duties of tonnage and impost....