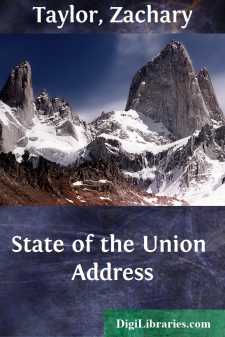 Sixty years have elapsed since the establishment of this Government, and the Congress of the United States again assembles to legislate for an empire of freemen. The predictions of evil prophets, who formerly pretended to foretell the downfall of our institutions, are now remembered only to be derided, and the United States of America at this moment present to the world the most stable and permanent Government on earth.

Such is the result of the labors of those who have gone before us. Upon Congress will eminently depend the future maintenance of our system of free government and the transmission of it unimpaired to posterity.

We are at peace with all the other nations of the world, and seek to maintain our cherished relations of amity with them. During the past year we have been blessed by a kind Providence with an abundance of the fruits of the earth, and although the destroying angel for a time visited extensive portions of our territory with the ravages of a dreadful pestilence, yet the Almighty has at length deigned to stay his hand and to restore the inestimable blessing of general health to a people who have acknowledged His power, deprecated His wrath, and implored His merciful protection.

While enjoying the benefits of amicable intercourse with foreign nations, we have not been insensible to the distractions and wars which have prevailed in other quarters of the world. It is a proper theme of thanksgiving to Him who rules the destinies of nations that we have been able to maintain amidst all these contests an independent and neutral position toward all belligerent powers.

Our relations with Great Britain are of the most friendly character. In consequence of the recent alteration of the British navigation acts, British vessels, from British and other foreign ports, will under our existing laws, after the 1st day of January next, be admitted to entry in our ports with cargoes of the growth, manufacture, or production of any part of the world on the same terms as to duties, imposts, and charges as vessels of the United States with their cargoes, and our vessels will be admitted to the same advantages in British ports, entering therein on the same terms as British vessels. Should no order in council disturb this legislative arrangement, the late act of the British Parliament, by which Great Britain is brought within the terms proposed by the act of Congress of the 1st of March, 1817, it is hoped will be productive of benefit to both countries.

A slight interruption of diplomatic intercourse which occurred between this Government and France, I am happy to say, has been terminated, and our minister there has been received. It is therefore unnecessary to refer now to the circumstances which led to that interruption. I need not express to you the sincere satisfaction with which we shall welcome the arrival of another envoy extraordinary and minister plenipotentiary from a sister Republic to which we have so long been, and still remain, bound by the strongest ties of amity....