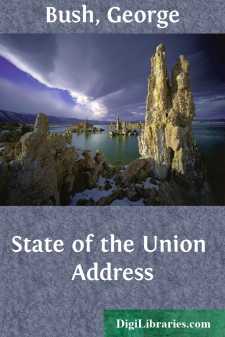 Tonight, I come not to speak about the "State of the Government", not to detail every new initiative we plan for the coming year, nor describe every line in the budget. I'm here to speak to you and to the American people about the State of the Union about our world, the changes we've seen, the challenges we face. And what that means for America.

There are singular moments in history, dates that divide all that goes before from all that comes after. And many of us in this chamber have lived much of our lives in a world whose fundamental features were defined in 1945. And the events of that year decreed the shape of nations, the pace of progress, freedom or oppression for millions of people around the world.

Nineteen Forty-Five provided the common frame of reference the compass points of the postwar era we've relied upon to understand ourselves. And that was our world until now. The events of the year just ended, the Revolution of '89, have been a chain reaction, changes so striking that it marks the beginning of a new era in the world's affairs.

Think back think back just twelve short months ago to the world we knew as 1989 began.

One year, one year ago the people of Panama lived in fear under the thumb of a dictator. Today democracy is restored. Panama is free.

"Operation Just Cause" has achieved its objective. And the number of military personel in Panama is now very close to what it was before the operation began. And tonight I am announcing that before the end of February the additional numbers of American troops, the brave men and women of our armed forces who made this mission a success, will be back home.

A year ago in Poland, Lech Walesa declared he was ready to open a dialogue with the Communist rulers of that country. And today, with the future of a free Poland in their own hands, members of Solidarity lead the Polish government.

And a year ago, freedom's playwright, Vaclav Havel, languished as a prisoner in Prague. And today it's Vaclav Havel, President of Czechoslovakia.

And one year ago Erich Honecker of East Germany claimed history as his guide. He predicted the Berlin Wall would last another hundred years. And today, less than one year later, it's the wall that's history.

America, not just the nation, but an idea alive in the minds of the people, everywhere. As this new world takes shape, America stands at the center of a widening circle of freedom, today, tomorrow and into the next century.

Our nation is the enduring dream of every immigrant who ever set foot on these shores, and the millions still struggling to be free. This nation, this idea called America was and always will be a new world, our new world.

At a workers' rally in a place called Branik on the outskirts of Prague the idea called America is alive. A worker, dressed in grimy overalls, rises to speak at the factory gates. And he begins his speech to his fellow citizens with these words, words of a distant revolution: "We hold these truths to be self-evident. That all men are created equal, that they are endowed by their creator with certain unalienable rights, and that among these are life, liberty and the pursuit of happiness." It's no secret here at home freedom's door opened long ago....