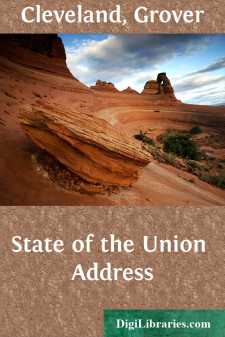 To the Congress of the United States:

Your assembling is clouded by a sense of public bereavement, caused by the recent and sudden death of Thomas A. Hendricks, Vice-President of the United States. His distinguished public services, his complete integrity and devotion to every duty, and his personal virtues will find honorable record in his country's history.

Ample and repeated proofs of the esteem and confidence in which he was held by his fellow-countrymen were manifested by his election to offices of the most important trust and highest dignity; and at length, full of years and honors, he has been laid at rest amid universal sorrow and benediction.

The Constitution, which requires those chosen to legislate for the people to annually meet in the discharge of their solemn trust, also requires the President to give to Congress information of the state of the Union and recommend to their consideration such measures as he shall deem necessary and expedient. At the threshold of a compliance with these constitutional directions it is well for us to bear in mind that our usefulness to the people's interests will be promoted by a constant appreciation of the scope and character of our respective duties as they relate to Federal legislation. While the Executive may recommend such measures as he shall deem expedient, the responsibility for legislative action must and should rest upon those selected by the people to make their laws.

Contemplation of the grave and responsible functions assigned to the respective branches of the Government under the Constitution will disclose the partitions of power between our respective departments and their necessary independence, and also the need for the exercise of all the power intrusted to each in that spirit of comity and cooperation which is essential to the proper fulfillment of the patriotic obligations which rest upon us as faithful servants of the people.

The jealous watchfulness of our constituencies, great and small, supplements their suffrages, and before the tribunal they establish every public servant should be judged.

It is gratifying to announce that the relations of the United States with all foreign powers continue to be friendly. Our position after nearly a century of successful constitutional government, maintenance of good faith in all our engagements, the avoidance of complications with other nations, and our consistent and amicable attitude toward the strong and weak alike furnish proof of a political disposition which renders professions of good will unnecessary. There are no questions of difficulty pending with any foreign government.

The Argentine Government has revived the long dormant question of the Falkland Islands by claiming from the United States indemnity for their loss, attributed to the action of the commander of the sloop of war Lexington in breaking up a piratical colony on those islands in 1831, and their subsequent occupation by Great Britain. In view of the ample justification for the act of the Lexington and the derelict condition of the islands before and after their alleged occupation by Argentine colonists, this Government considers the claim as wholly groundless....