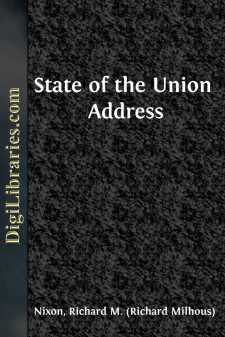 Mr. Speaker, Mr. President, my colleagues in the Congress, our distinguished guests and my fellow Americans:

To address a joint session of the Congress in this great Chamber in which I was once privileged to serve is an honor for which I am deeply grateful.

The State of the Union Address is traditionally an occasion for a lengthy and detailed account by the President of what he has accomplished in the past, what he wants the Congress to do in the future, and, in an election year, to lay the basis for the political issues which might be decisive in the fall.

Occasionally there comes a time when profound and far-reaching events command a break with tradition. This is such a time.

I say this not only because 1970 marks the beginning of a new decade in which America will celebrate its 200th birthday. I say it because new knowledge and hard experience argue persuasively that both our programs and our institutions in America need to be reformed.

The moment has arrived to harness the vast energies and abundance of this land to the creation of a new American experience, an experience richer and deeper and more truly a reflection of the goodness and grace of the human spirit.

The seventies will be a time of new beginnings, a time of exploring both on the earth and in the heavens, a time of discovery. But the time has also come for emphasis on developing better ways of managing what we have and of completing what man's genius has begun but left unfinished.

Our land, this land that is ours together, is a great and a good land. It is also an unfinished land, and the challenge of perfecting it is the summons of the seventies.

It is in that spirit that I address myself to those great issues facing ourNation which are above partisanship.

When we speak of America's priorities the first priority must always be peace for America and the world.

The major immediate goal of our foreign policy is to bring an end to the war in Vietnam in a way that our generation will be remembered not so much as the generation that suffered in war, but more for the fact that we had the courage and character to win the kind of a just peace that the next generation was able to keep.

We are making progress toward that goal.

The prospects for peace are far greater today than they were a year ago.

A major part of the credit for this development goes to the Members of this Congress who, despite their differences on the conduct of the war, have overwhelmingly indicated their support of a just peace. By this action, you have completely demolished the enemy's hopes that they can gain in Washington the victory our fighting men have denied them in Vietnam.

No goal could be greater than to make the next generation the first in this century in which America was at peace with every nation in the world.

I shall discuss in detail the new concepts and programs designed to achieve this goal in a separate report on foreign policy, which I shall submit to the Congress at a later date.

Today, let me describe the directions of our new policies.

We have based our policies on an evaluation of the world as it is, not as it was 25 years ago at the conclusion of World War II....