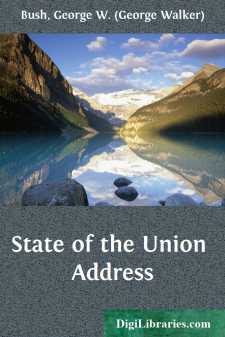 Thank you very much. Mr. Speaker, Vice President Cheney, members of Congress, distinguished guests, fellow citizens: As we gather tonight, our nation is at war, our economy is in recession, and the civilized world faces unprecedented dangers. Yet the state of our Union has never been stronger. (Applause.)

We last met in an hour of shock and suffering. In four short months, our nation has comforted the victims, begun to rebuild New York and the Pentagon, rallied a great coalition, captured, arrested, and rid the world of thousands of terrorists, destroyed Afghanistan's terrorist training camps, saved a people from starvation, and freed a country from brutal oppression. (Applause.)

The American flag flies again over our embassy in Kabul. Terrorists who once occupied Afghanistan now occupy cells at Guantanamo Bay. (Applause.) And terrorist leaders who urged followers to sacrifice their lives are running for their own. (Applause.)

America and Afghanistan are now allies against terror. We'll be partners in rebuilding that country. And this evening we welcome the distinguished interim leader of a liberated Afghanistan: Chairman Hamid Karzai. (Applause.)

The last time we met in this chamber, the mothers and daughters of Afghanistan were captives in their own homes, forbidden from working or going to school. Today women are free, and are part of Afghanistan's new government. And we welcome the new Minister of Women's Affairs, Doctor Sima Samar. (Applause.)

Our progress is a tribute to the spirit of the Afghan people, to the resolve of our coalition, and to the might of the United States military. (Applause.) When I called our troops into action, I did so with complete confidence in their courage and skill. And tonight, thanks to them, we are winning the war on terror. (Applause.) The men and women of our Armed Forces have delivered a message now clear to every enemy of the United States: Even 7,000 miles away, across oceans and continents, on mountaintops and in caves—you will not escape the justice of this nation. (Applause.)

For many Americans, these four months have brought sorrow, and pain that will never completely go away. Every day a retired firefighter returns to Ground Zero, to feel closer to his two sons who died there. At a memorial in New York, a little boy left his football with a note for his lost father: Dear Daddy, please take this to heaven. I don't want to play football until I can play with you again some day.

Last month, at the grave of her husband, Michael, a CIA officer and Marine who died in Mazur-e-Sharif, Shannon Spann said these words of farewell: "Semper Fi, my love." Shannon is with us tonight. (Applause.)

Shannon, I assure you and all who have lost a loved one that our cause is just, and our country will never forget the debt we owe Michael and all who gave their lives for freedom.

Our cause is just, and it continues. Our discoveries in Afghanistan confirmed our worst fears, and showed us the true scope of the task ahead. We have seen the depth of our enemies' hatred in videos, where they laugh about the loss of innocent life. And the depth of their hatred is equaled by the madness of the destruction they design. We have found diagrams of American nuclear power plants and public water facilities, detailed instructions for making chemical weapons, surveillance maps of American cities, and thorough descriptions of landmarks in America and throughout the world....