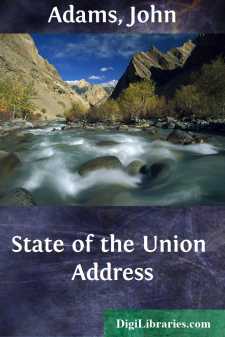 I was for some time apprehensive that it would be necessary, on account of the contagious sickness which afflicted the city of Philadelphia, to convene the National Legislature at some other place. This measure it was desirable to avoid, because it would occasion much public inconvenience and a considerable public expense and add to the calamities of the inhabitants of this city, whose sufferings must have excited the sympathy of all their fellow citizens. Therefore, after taking measures to ascertain the state and decline of the sickness, I postponed my determination, having hopes, now happily realized, that, without hazard to the lives or health of the members, Congress might assemble at this place, where it was next by law to meet. I submit, however, to your consideration whether a power to postpone the meeting of Congress, without passing the time fixed by the Constitution upon such occasions, would not be a useful amendment to the law of 1794.

Although I can not yet congratulate you on the reestablishment of peace in Europe and the restoration of security to the persons and properties of our citizens from injustice and violence at sea, we have, nevertheless, abundant cause of gratitude to the source of benevolence and influence for interior tranquillity and personal security, for propitious seasons, prosperous agriculture, productive fisheries, and general improvements, and, above all, for a rational spirit of civil and religious liberty and a calm but steady determination to support our sovereignty, as well as our moral and our religious principles, against all open and secret attacks.

Our envoys extraordinary to the French Republic embarked—one in July, the other in August—to join their colleague in Holland. I have received intelligence of the arrival of both of them in Holland, from whence they all proceeded on their journeys to Paris within a few days of the 19th of September. Whatever may be the result of this mission, I trust that nothing will have been omitted on my part to conduct the negotiation to a successful conclusion, on such equitable terms as may be compatible with the safety, honor and interest of the United States. Nothing, in the mean time, will contribute so much to the preservation of peace and the attainment of justice as manifestation of that energy and unanimity of which on many former occasions the people of the United States have given such memorable proofs, and the exertion of those resources for national defense which a beneficent Providence has kindly placed within their power.

It may be confidently asserted that nothing has occurred since the adjournment of Congress which renders inexpedient those precautionary measures recommended by me to the consideration of the two Houses at the opening of your late extraordinary session. If that system was then prudent, it is more so now, as increasing depredations strengthen the reasons for its adoption.

Indeed, whatever may be the issue of the negotiation with France, and whether the war in Europe is or is not to continue, I hold it most certain that permanent tranquillity and order will not soon be obtained....