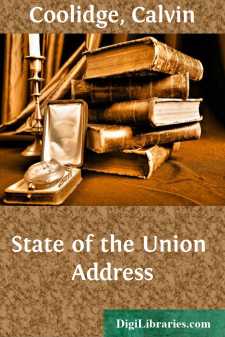 Since the close of the last Congress the Nation has lost President Harding. The world knew his kindness and his humanity, his greatness and his character. He has left his mark upon history. He has made justice more certain and peace more secure. The surpassing tribute paid to his memory as he was borne across the continent to rest at last at home revealed the place he held in the hearts of the American people. But this is not the occasion for extended reference to the man or his work. In this presence, among these who knew and loved him, that is unnecessary. But we who were associated with him could not resume together the functions of our office without pausing for a moment, and in his memory reconsecrating ourselves to the service of our country. He is gone. We remain. It is our duty, under the inspiration of his example, to take up the burdens which he was permitted to lay down, and to develop and support the wise principles of government which he represented.

Our country has one cardinal principle to maintain in its foreign policy. It is an American principle. It must be an American policy. We attend to our own affairs, conserve our own strength, and protect the interests of our own citizens; but we recognize thoroughly our obligation to help others, reserving to the decision of our own Judgment the time, the place, and the method. We realize the common bond of humanity. We know the inescapable law of service.

Our country has definitely refused to adopt and ratify the covenant of the League of Nations. We have not felt warranted in assuming the responsibilities which its members have assumed. I am not proposing any change in this policy; neither is the Senate. The incident, so far as we are concerned, is closed. The League exists as a foreign agency. We hope it will be helpful. But the United States sees no reason to limit its own freedom and independence of action by joining it. We shall do well to recognize this basic fact in all national affairs and govern ourselves accordingly.

Our foreign policy has always been guided by two principles. The one is the avoidance of permanent political alliances which would sacrifice our proper independence. The other is the peaceful settlement of controversies between nations. By example and by treaty we have advocated arbitration. For nearly 25 years we have been a member of The Hague Tribunal, and have long sought the creation of a permanent World Court of Justice. I am in full accord with both of these policies. I favor the establishment of such a court intended to include the whole world. That is, and has long been, an American policy.

Pending before the Senate is a proposal that this Government give its support to the Permanent Court of International Justice, which is a new and somewhat different plan. This is not a partisan question. It should not assume an artificial importance. The court is merely a convenient instrument of adjustment to which we could go, but to which we could not be brought. It should be discussed with entire candor, not by a political but by a judicial method, without pressure and without prejudice. Partisanship has no place in our foreign relations. As I wish to see a court established, and as the proposal presents the only practical plan on which many nations have ever agreed, though it may not meet every desire, I therefore commend it to the favorable consideration of the Senate, with the proposed reservations clearly indicating our refusal to adhere to the League of Nations.

Our diplomatic relations, lately so largely interrupted, are now being resumed, but Russia presents notable difficulties. We have every desire to see that great people, who are our traditional friends, restored to their position among the nations of the earth. We have relieved their pitiable destitution with an enormous charity....