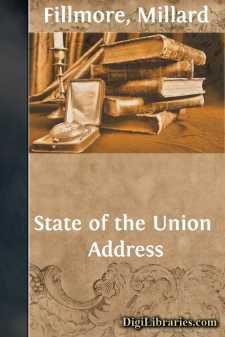 Being suddenly called in the midst of the last session of Congress by a painful dispensation of Divine Providence to the responsible station which I now hold, I contented myself with such communications to the Legislature as the exigency of the moment seemed to require. The country was shrouded in mourning for the loss of its venerable Chief Magistrate and all hearts were penetrated with grief. Neither the time nor the occasion appeared to require or to justify on my part any general expression of political opinions or any announcement of the principles which would govern me in the discharge of the duties to the performance of which I had been so unexpectedly called. I trust, therefore, that it may not be deemed inappropriate if I avail myself of this opportunity of the reassembling of Congress to make known my sentiments in a general manner in regard to the policy which ought to be pursued by the Government both in its intercourse with foreign nations and its management and administration of internal affairs.

Nations, like individuals in a state of nature, are equal and independent, possessing certain rights and owing certain duties to each other, arising from their necessary and unavoidable relations; which rights and duties there is no common human authority to protect and enforce. Still, they are rights and duties, binding in morals, in conscience, and in honor, although there is no tribunal to which an injured party can appeal but the disinterested judgment of mankind, and ultimately the arbitrament of the sword.

Among the acknowledged rights of nations is that which each possesses of establishing that form of government which it may deem most conducive to the happiness and prosperity of its own citizens, of changing that form as circumstances may require, and of managing its internal affairs according to its own will. The people of the United States claim this right for themselves, and they readily concede it to others. Hence it becomes an imperative duty not to interfere in the government or internal policy of other nations; and although we may sympathize with the unfortunate or the oppressed everywhere in their struggles for freedom, our principles forbid us from taking any part in such foreign contests. We make no wars to promote or to prevent successions to thrones, to maintain any theory of a balance of power, or to suppress the actual government which any country chooses to establish for itself. We instigate no revolutions, nor suffer any hostile military expeditions to be fitted out in the United States to invade the territory or provinces of a friendly nation. The great law of morality ought to have a national as well as a personal and individual application. We should act toward other nations as we wish them to act toward us, and justice and conscience should form the rule of conduct between governments, instead of mere power, self interest, or the desire of aggrandizement. To maintain a strict neutrality in foreign wars, to cultivate friendly relations, to reciprocate every noble and generous act, and to perform punctually and scrupulously every treaty obligation—these are the duties which we owe to other states, and by the performance of which we best entitle ourselves to like treatment from them; or, if that, in any case, be refused, we can enforce our own rights with justice and a clear conscience....