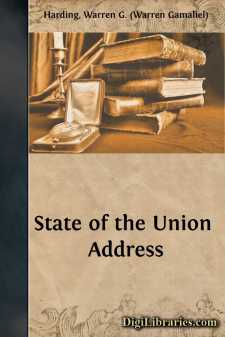 It is a very gratifying privilege to come to the Congress with the Republic at peace with all the nations of the world. More, it is equally gratifying to report that our country is not only free from every impending, menace of war, but there are growing assurances of the permanency of the peace which we so deeply cherish.

For approximately ten years we have dwelt amid menaces of war or as participants in war's actualities, and the inevitable aftermath, with its disordered conditions, bits added to the difficulties of government which adequately can not be appraised except by, those who are in immediate contact and know the responsibilities. Our tasks would be less difficult if we had only ourselves to consider, but so much of the world was involved, the disordered conditions are so well-nigh universal, even among nations not engaged in actual warfare, that no permanent readjustments can be effected without consideration of our inescapable relationship to world affairs in finance and trade. Indeed, we should be unworthy of our best traditions if we were unmindful of social, moral, and political conditions which are not of direct concern to us, but which do appeal to the human sympathies and the very becoming interest of a people blest with our national good fortune.

It is not my purpose to bring to you a program of world restoration. In the main such a program must be worked out by the nations more directly concerned. They must themselves turn to the heroic remedies for the menacing conditions under which they are struggling, then we can help, and we mean to help. We shall do so unselfishly because there is compensation in the consciousness of assisting, selfishly because the commerce and international exchanges in trade, which marked our high tide of fortunate advancement, are possible only when the nations of all continents are restored to stable order and normal relationship.

In the main the contribution of this Republic to restored normalcy in the world must come through the initiative of the executive branch of the Government, but the best of intentions and most carefully considered purposes would fail utterly if the sanction and the cooperation of Congress were not cheerfully accorded.

I am very sure we shall have no conflict of opinion about constitutional duties or authority. During the anxieties of war, when necessity seemed compelling there were excessive grants of authority and all extraordinary concentration of powers in the Chief Executive. The repeal of war-time legislation and the automatic expirations which attended the peace proclamations have put an end to these emergency excesses but I have the wish to go further than that. I want to join you ill restoring-, ill the most cordial way, the spirit of coordination and cooperation, and that mutuality of confidence and respect which is necessary ill representative popular government.

Encroachment upon the functions of Congress or attempted dictation of its policy are not to be thought of, much less attempted, but there is all insistent call for harmony of purpose and concord of action to speed the solution of the difficult problems confronting both the legislative and executive branches of the Government.

It is worth while to make allusion here to the character of our Clove Government, mindful as one must be that an address to you is no less it message to all our people, for whom you speak most intimately....