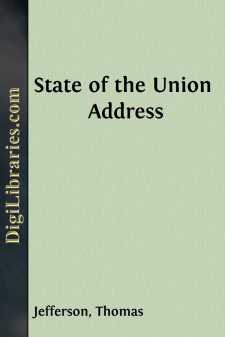 Fellow Citizens of the Senate and House of Representatives:

It is a circumstance of sincere gratification to me that on meeting the great council of our nation I am able to announce to them on grounds of reasonable certainty that the wars and troubles which have for so many years afflicted our sister nations have at length come to an end, and that the communications of peace and commerce are once more opening among them. Whilst we devoutly return thanks to the beneficent Being who has been pleased to breathe into them the spirit of conciliation and forgiveness, we are bound with peculiar gratitude to be thankful to Him that our own peace has been preserved through so perilous a season, and ourselves permitted quietly to cultivate the earth and to practice and improve those arts which tend to increase our comforts. The assurances, indeed, of friendly disposition received from all the powers with whom we have principle relations had inspired a confidence that our peace with them would not have been disturbed. But a cessation of irregularities which had affected the commerce of neutral nations and of the irritations and injuries produced by them can not but add to this confidence, and strengthens at the same time the hope that wrongs committed on unoffending friends under a pressure of circumstances will now be reviewed with candor, and will be considered as founding just claims of retribution for the past and new assurance for the future.

Among our Indian neighbors also a spirit of peace and friendship generally prevails, and I am happy to inform you that the continued efforts to introduce among them the implements and the practice of husbandry and the household arts have not been without success; that they are becoming more and more sensible of the superiority of this dependence for clothing and subsistence over the precarious resources of hunting and fishing, and already we are able to announce that instead of that constant diminution of their numbers produced by their wars and their wants, some of them begin to experience an increase of population.

To this state of general peace with which we have been blessed, one only exception exists. Tripoli, the least considerable of the Barbary States, had come forward with demands unfounded either in right or in compact, and had permitted itself to denounce war on our failure to comply before a given day. The style of the demand admitted but one answer.

I sent a small squadron of frigates into the Mediterranean, with assurances to that power of our sincere desire to remain in peace, but with orders to protect our commerce against the threatened attack. The measure was seasonable and salutary. The Bey had already declared war. His cruisers were out. Two had arrived at Gibraltar. Our commerce in the Mediterranean was blockaded and that of the Atlantic in peril.

The arrival of our squadron dispelled the danger. One of the Tripolitan cruisers having fallen in with and engaged the small schooner Enterprise, commanded by Lieutenant Sterret, which had gone as a tender to our larger vessels, was captured, after a heavy slaughter of her men, without the loss of a single one on our part....