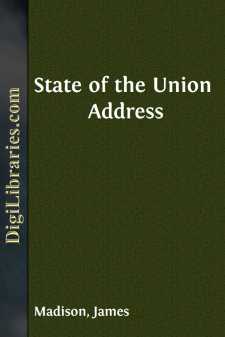 At the period of our last meeting I had the satisfaction of communicating an adjustment with one of the principal belligerent nations, highly important in itself, and still more so as presaging a more extended accommodation. It is with deep concern I am now to inform you that the favorable prospect has been over-clouded by a refusal of the British Government to abide by the act of its minister plenipotentiary, and by its ensuing policy toward the United States as seen through the communications of the minister sent to replace him.

Whatever pleas may be urged for a disavowal of engagements formed by diplomatic functionaries in cases where by the terms of the engagements a mutual ratification is reserved, or where notice at the time may have been given of a departure from instructions, or in extraordinary cases essentially violating the principles of equity, a disavowal could not have been apprehended in a case where no such notice or violation existed, where no such ratification was reserved, and more especially where, as is now in proof, an engagement to be executed without any such ratification was contemplated by the instructions given, and where it had with good faith been carried into immediate execution on the part of the United States.

These considerations not having restrained the British Government from disavowing the arrangement by virtue of which its orders in council were to be revoked, and the event authorizing the renewal of commercial intercourse having thus not taken place, it necessarily became a question of equal urgency and importance whether the act prohibiting that intercourse was not to be considered as remaining in legal force. This question being, after due deliberation, determined in the affirmative, a proclamation to that effect was issued. It could not but happen, however, that a return to this state of things from that which had followed an execution of the arrangement by the United States would involve difficulties. With a view to diminish these as much as possible, the instructions from the Secretary of the Treasury now laid before you were transmitted to the collectors of the several ports. If in permitting British vessels to depart without giving bonds not to proceed to their own ports it should appear that the tenor of legal authority has not been strictly pursued, it is to be ascribed to the anxious desire which was felt that no individuals should be injured by so unforeseen an occurrence; and I rely on the regard of Congress for the equitable interests of our own citizens to adopt whatever further provisions may be found requisite for a general remission of penalties involuntarily incurred.

The recall of the disavowed minister having been followed by the appointment of a successor, hopes were indulged that the new mission would contribute to alleviate the disappointment which had been produced, and to remove the causes which had so long embarrassed the good understanding of the two nations. It could not be doubted that it would at least be charged with conciliatory explanations of the step which had been taken and with proposals to be substituted for the rejected arrangement....