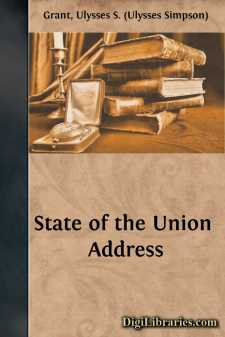 In coming before you for the first time as Chief Magistrate of this great nation, it is with gratitude to the Giver of All Good for the many benefits we enjoy. We are blessed with peace at home, and are without entangling alliances abroad to forebode trouble; with a territory unsurpassed in fertility, of an area equal to the abundant support of 500,000,000 people, and abounding in every variety of useful mineral in quantity sufficient to supply the world for generations; with exuberant crops; with a variety of climate adapted to the production of every species of earth's riches and suited to the habits, tastes, and requirements of every living thing; with a population of 40,000,000 free people, all speaking one language; with facilities for every mortal to acquire an education; with institutions closing to none the avenues to fame or any blessing of fortune that may be coveted; with freedom of the pulpit, the press, and the school; with a revenue flowing into the National Treasury beyond the requirements of the Government. Happily, harmony is being rapidly restored within our own borders. Manufactures hitherto unknown in our country are springing up in all sections, producing a degree of national independence unequaled by that of any other power.

These blessings and countless others are intrusted to your care and mine for safe-keeping for the brief period of our tenure of office. In a short time we must, each of us, return to the ranks of the people, who have conferred upon us our honors, and account to them for our stewardship. I earnestly desire that neither you nor I may be condemned by a free and enlightened constituency nor by our own consciences.

Emerging from a rebellion of gigantic magnitude, aided, as it was, by the sympathies and assistance of nations with which we were at peace, eleven States of the Union were, four years ago, left without legal State governments. A national debt had been contracted; American commerce was almost driven from the seas; the industry of one-half of the country had been taken from the control of the capitalist and placed where all labor rightfully belongs—in the keeping of the laborer. The work of restoring State governments loyal to the Union, of protecting and fostering free labor, and providing means for paying the interest on the public debt has received ample attention from Congress. Although your efforts have not met with the success in all particulars that might have been desired, yet on the whole they have been more successful than could have been reasonably anticipated.

Seven States which passed ordinances of secession have been fully restored to their places in the Union. The eighth (Georgia) held an election at which she ratified her constitution, republican in form, elected a governor, Members of Congress, a State legislature, and all other officers required. The governor was duly installed, and the legislature met and performed all the acts then required of them by the reconstruction acts of Congress....