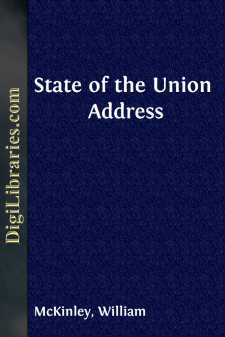 It gives me pleasure to extend greeting to the Fifty-fifth Congress, assembled in regular session at the seat of Government, with many of whose Senators and Representatives I have been associated in the legislative service. Their meeting occurs under felicitous conditions, justifying sincere congratulation and calling for our grateful acknowledgment to a beneficent Providence which has so signally blessed and prospered us as a nation. Peace and good will with all the nations of the earth continue unbroken.

A matter of genuine satisfaction is the growing feeling of fraternal regard and unification of all sections of our country, the incompleteness of which has too long delayed realization of the highest blessings of the Union. The spirit of patriotism is universal and is ever increasing in fervor. The public questions which now most engross us are lifted far above either partisanship, prejudice, or former sectional differences. They affect every part of our common country alike and permit of no division on ancient lines. Questions of foreign policy, of revenue, the soundness of the currency, the inviolability of national obligations, the improvement of the public service, appeal to the individual conscience of every earnest citizen to whatever party he belongs or in whatever section of the country he may reside.

The extra session of this Congress which closed during July last enacted important legislation, and while its full effect has not yet been realized, what it has already accomplished assures us of its timeliness and wisdom. To test its permanent value further time will be required, and the people, satisfied with its operation and results thus far, are in no mind to withhold from it a fair trial.

Tariff legislation having been settled by the extra session of Congress, the question next pressing for consideration is that of the currency.

With the great resources of the Government, and with the honorable example of the past before us, we ought not to hesitate to enter upon a currency revision which will make our demand obligations less onerous to the Government and relieve our financial laws from ambiguity and doubt....