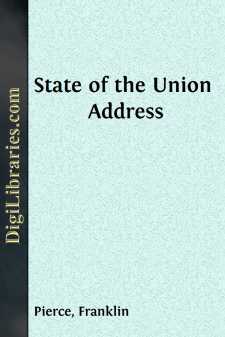 The interest with which the people of the Republic anticipate the assembling of Congress and the fulfillment on that occasion of the duty imposed upon a new President is one of the best evidences of their capacity to realize the hopes of the founders of a political system at once complex and symmetrical. While the different branches of the Government are to a certain extent independent of each other, the duties of all alike have direct reference to the source of power. Fortunately, under this system no man is so high and none so humble in the scale of public station as to escape from the scrutiny or to be exempt from the responsibility which all official functions imply.

Upon the justice and intelligence of the masses, in a government thus organized, is the sole reliance of the confederacy and the only security for honest and earnest devotion to its interests against the usurpations and encroachment of power on the one hand and the assaults of personal ambition on the other.

The interest of which I have spoken is inseparable from an inquiring, self-governing community, but stimulated, doubtless, at the present time by the unsettled condition of our relations with several foreign powers, by the new obligations resulting from a sudden extension of the field of enterprise, by the spirit with which that field has been entered and the amazing energy with which its resources for meeting the demands of humanity have been developed.

Although disease, assuming at one time the characteristics of a widespread and devastating pestilence, has left its sad traces upon some portions of our country, we have still the most abundant cause for reverent thankfulness to God for an accumulation of signal mercies showered upon us as a nation. It is well that a consciousness of rapid advancement and increasing strength be habitually associated with an abiding sense of dependence upon Him who holds in His hands the destiny of men and of nations.

Recognizing the wisdom of the broad principle of absolute religious toleration proclaimed in our fundamental law, and rejoicing in the benign influence which it has exerted upon our social and political condition, I should shrink from a clear duty did I fail to express my deepest conviction that we can place no secure reliance upon any apparent progress if it be not sustained by national integrity, resting upon the great truths affirmed and illustrated by divine revelation. In the midst of our sorrow for the afflicted and suffering, it has been consoling to see how promptly disaster made true neighbors of districts and cities separated widely from each other, and cheering to watch the strength of that common bond of brotherhood which unites all hearts, in all parts of this Union, when danger threatens from abroad or calamity impends over us at home.

Our diplomatic relations with foreign powers have undergone no essential change since the adjournment of the last Congress. With some of them questions of a disturbing character are still pending, but there are good reasons to believe that these may all be amicably adjusted....