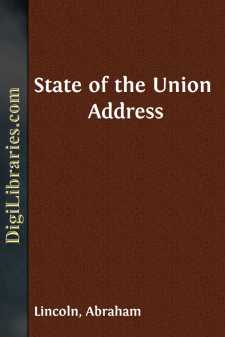 In the midst of unprecedented political troubles we have cause of great gratitude to God for unusual good health and most abundant harvests.

You will not be surprised to learn that in the peculiar exigencies of the times our intercourse with foreign nations has been attended with profound solicitude, chiefly turning upon our own domestic affairs.

A disloyal portion of the American people have during the whole year been engaged in an attempt to divide and destroy the Union. A nation which endures factious domestic division is exposed to disrespect abroad, and one party, if not both, is sure sooner or later to invoke foreign intervention.

Nations thus tempted to interfere are not always able to resist the counsels of seeming expediency and ungenerous ambition, although measures adopted under such influences seldom fail to be unfortunate and injurious to those adopting them.

The disloyal citizens of the United States who have offered the ruin of our country in return for the aid and comfort which they have invoked abroad have received less patronage and encouragement than they probably expected. If it were just to suppose, as the insurgents have seemed to assume, that foreign nations in this case, discarding all moral, social, and treaty obligations, would act solely and selfishly for the most speedy restoration of commerce, including especially the acquisition of cotton, those nations appear as yet not to have seen their way to their object more directly or clearly through the destruction than through the preservation of the Union. If we could dare to believe that foreign nations are actuated by no higher principle than this, I am quite sure a sound argument could be made to show them that they can reach their aim more readily and easily by aiding to crush this rebellion than by giving encouragement to it.

The principal lever relied on by the insurgents for exciting foreign nations to hostility against us, as already intimated, is the embarrassment of commerce. Those nations, however, not improbably saw from the first that it was the Union which made as well our foreign as our domestic commerce. They can scarcely have failed to perceive that the effort for disunion produces the existing difficulty, and that one strong nation promises more durable peace and a more extensive, valuable, and reliable commerce than can the same nation broken into hostile fragments.

It is not my purpose to review our discussions with foreign states, because, whatever might be their wishes or dispositions, the integrity of our country and the stability of our Government mainly depend not upon them, but on the loyalty, virtue, patriotism, and intelligence of the American people. The correspondence itself, with the usual reservations, is herewith submitted.

I venture to hope it will appear that we have practiced prudence and liberality toward foreign powers, averting causes of irritation and with firmness maintaining our own rights and honor.

Since, however, it is apparent that here, as in every other state, foreign dangers necessarily attend domestic difficulties, I recommend that adequate and ample measures be adopted for maintaining the public defenses on every side....