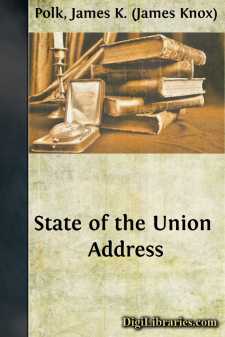 It is to me a source of unaffected satisfaction to meet the representatives of the States and the people in Congress assembled, as it will be to receive the aid of their combined wisdom in the administration of public affairs. In performing for the first time the duty imposed on me by the Constitution of giving to you information of the state of the Union and recommending to your consideration such measures as in my judgment are necessary and expedient, I am happy that I can congratulate you on the continued prosperity of our country. Under the blessings of Divine Providence and the benign influence of our free institutions, it stands before the world a spectacle of national happiness.

With our unexampled advancement in all the elements of national greatness, the affection of the people is confirmed for the Union of the States and for the doctrines of popular liberty which lie at the foundation of our Government.

It becomes us in humility to make our devout acknowledgments to the Supreme Ruler of the Universe for the inestimable civil and religious blessings with which we are favored.

In calling the attention of Congress to our relations with foreign powers, I am gratified to be able to state that though with some of them there have existed since your last session serious causes of irritation and misunderstanding, yet no actual hostilities have taken place. Adopting the maxim in the conduct of our foreign affairs "to ask nothing that is not right and submit to nothing that is wrong," it has been my anxious desire to preserve peace with all nations, but at the same time to be prepared to resist aggression and maintain all our just rights.

In pursuance of the joint resolution of Congress "for annexing Texas to the United States," my predecessor, on the 3d day of March, 1845, elected to submit the first and second sections of that resolution to the Republic of Texas as an overture on the part of the United States for her admission as a State into our Union. This election I approved, and accordingly the charge d'affaires of the United States in Texas, under instructions of the 10th of March, 1845, presented these sections of the resolution for the acceptance of that Republic. The executive government, the Congress, and the people of Texas in convention have successively complied with all the terms and conditions of the joint resolution. A constitution for the government of the State of Texas, formed by a convention of deputies, is herewith laid before Congress. It is well known, also, that the people of Texas at the polls have accepted the terms of annexation and ratified the constitution. I communicate to Congress the correspondence between the Secretary of State and our charge d'affaires in Texas, and also the correspondence of the latter with the authorities of Texas, together with the official documents transmitted by him to his own Government. The terms of annexation which were offered by the United States having been accepted by Texas, the public faith of both parties is solemnly pledged to the compact of their union....