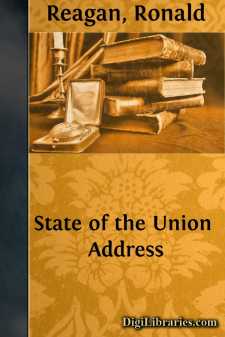 Today marks my first State of the Union address to you, a constitutional duty as old as our Republic itself.

President Washington began this tradition in 1790 after reminding the Nation that the destiny of self-government and the "preservation of the sacred fire of liberty" is "finally staked on the experiment entrusted to the hands of the American people." For our friends in the press, who place a high premium on accuracy, let me say: I did not actually hear George Washington say that. But it is a matter of historic record.

But from this podium, Winston Churchill asked the free world to stand together against the onslaught of aggression. Franklin Delano Roosevelt spoke of a day of infamy and summoned a nation to arms. Douglas MacArthur made an unforgettable farewell to a country he loved and served so well. Dwight Eisenhower reminded us that peace was purchased only at the price of strength. And John F. Kennedy spoke of the burden and glory that is freedom.

When I visited this Chamber last year as a newcomer to Washington, critical of past policies which I believed had failed, I proposed a new spirit of partnership between this Congress and this administration and between Washington and our State and local governments. In forging this new partnership for America, we could achieve the oldest hopes of our Republic—prosperity for our nation, peace for the world, and the blessings of individual liberty for our children and, someday, for all of humanity.

It's my duty to report to you tonight on the progress that we have made in our relations with other nations, on the foundation we've carefully laid for our economic recovery, and finally, on a bold and spirited initiative that I believe can change the face of American government and make it again the servant of the people.

Seldom have the stakes been higher for America. What we do and say here will make all the difference to autoworkers in Detroit, lumberjacks in the Northwest, steelworkers in Steubenville who are in the unemployment lines; to black teenagers in Newark and Chicago; to hard-pressed farmers and small businessmen; and to millions of everyday Americans who harbor the simple wish of a safe and financially secure future for their children. To understand the state of the Union, we must look not only at where we are and where we're going but where we've been. The situation at this time last year was truly ominous.

The last decade has seen a series of recessions. There was a recession in 1970, in 1974, and again in the spring of 1980. Each time, unemployment increased and inflation soon turned up again. We coined the word "stagflation" to describe this.

Government's response to these recessions was to pump up the money supply and increase spending. In the last 6 months of 1980, as an example, the money supply increased at the fastest rate in postwar history—13 percent. Inflation remained in double digits, and government spending increased at an annual rate of 17 percent. Interest rates reached a staggering 21.5 percent....