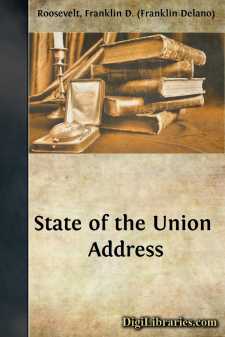 I come before you at the opening of the Regular Session of the 73d Congress, not to make requests for special or detailed items of legislation; I come, rather, to counsel with you, who, like myself, have been selected to carry out a mandate of the whole people, in order that without partisanship you and I may cooperate to continue the restoration of our national wellbeing and, equally important, to build on the ruins of the past a new structure designed better to meet the present problems of modern civilization.

Such a structure includes not only the relations of industry and agriculture and finance to each other but also the effect which all of these three have on our individual citizens and on the whole people as a Nation.

Now that we are definitely in the process of recovery, lines have been rightly drawn between those to whom this recovery means a return to old methods—and the number of these people is small—and those for whom recovery means a reform of many old methods, a permanent readjustment of many of our ways of thinking and therefore of many of our social and economic arrangements. . . . .

Civilization cannot go back; civilization must not stand still. We have undertaken new methods. It is our task to perfect, to improve, to alter when necessary, but in all cases to go forward. To consolidate what we are doing, to make our economic and social structure capable of dealing with modern life is the joint task of the legislative, the judicial, and the executive branches of the national Government.

Without regard to party, the overwhelming majority of our people seek a greater opportunity for humanity to prosper and find happiness. They recognize that human welfare has not increased and does not increase through mere materialism and luxury, but that it does progress through integrity, unselfishness, responsibility and justice.

In the past few months, as a result of our action, we have demanded of many citizens that they surrender certain licenses to do as they please in their business relationships; but we have asked this in exchange for the protection which the State can give against exploitation by their fellow men or by combinations of their fellow men.

I congratulate this Congress upon the courage, the earnestness and the efficiency with which you met the crisis at the Special Session. It was your fine understanding of the national problem that furnished the example which the country has so splendidly followed. I venture to say that the task confronting the First Congress of 1789 was no greater than your own.

I shall not attempt to set forth either the many phases of the crisis which we experienced last March, or the many measures which you and I undertook during the Special Session that we might initiate recovery and reform.

It is sufficient that I should speak in broad terms of the results of our common counsel. The credit of the Government has been fortified by drastic reduction in the cost of its permanent agencies through the Economy Act....