by Lyndon B. (Lyndon Baines) Johnson 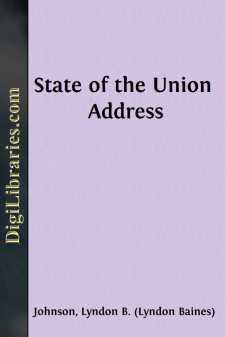 Mr. Speaker, Mr. President, Members of the House and Senate, my fellowAmericans:

I will be brief, for our time is necessarily short and our agenda is already long.

Last year's congressional session was the longest in peacetime history. With that foundation, let us work together to make this year's session the best in the Nation's history.

We have in 1964 a unique opportunity and obligation—to prove the success of our system; to disprove those cynics and critics at home and abroad who question our purpose and our competence.

If we fail, if we fritter and fumble away our opportunity in needless, senseless quarrels between Democrats and Republicans, or between the House and the Senate, or between the South and North, or between the Congress and the administration, then history will rightfully judge us harshly. But if we succeed, if we can achieve these goals by forging in this country a greater sense of union, then, and only then, can we take full satisfaction in the State of the Union. II.

Here in the Congress you can demonstrate effective legislative leadership by discharging the public business with clarity and dispatch, voting each important proposal up, or voting it down, but at least bringing it to a fair and a final vote.

Let us carry forward the plans and programs of John Fitzgerald Kennedy—not because of our sorrow or sympathy, but because they are right.

In his memory today, I especially ask all members of my own political faith, in this election year, to put your country ahead of your party, and to always debate principles; never debate personalities.

For my part, I pledge a progressive administration which is efficient, and honest and frugal. The budget to be submitted to the Congress shortly is in full accord with this pledge.

It will cut our deficit in half—from $10 billion to $4,900 million. It will be, in proportion to our national output, the smallest budget since 1951.

It will call for a substantial reduction in Federal employment, a feat accomplished only once before in the last 10 years. While maintaining the full strength of our combat defenses, it will call for the lowest number of civilian personnel in the Department of Defense since 1950....