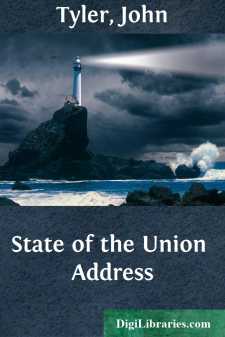 To the Senate and House of Representatives of the United States:

In coming together, fellow-citizens, to enter again upon the discharge of the duties with which the people have charged us severally, we find great occasion to rejoice in the general prosperity of the country. We are in the enjoyment of all the blessings of civil and religious liberty, with unexampled means of education, knowledge, and improvement. Through the year which is now drawing to a close peace has been in our borders and plenty in our habitations, and although disease has visited some few portions of the land with distress and mortality, yet in general the health of the people has been preserved, and we are all called upon by the highest obligations of duty to renew our thanks and our devotion to our Heavenly Parent, who has continued to vouchsafe to us the eminent blessings which surround us and who has so signally crowned the year with His goodness. If we find ourselves increasing beyond example in numbers, in strength, in wealth, in knowledge, in everything which promotes human and social happiness, let us ever remember our dependence for all these on the protection and merciful dispensations of Divine Providence.

Since your last adjournment Alexander McLeod, a British subject who was indicted for the murder of an American citizen, and whose case has been the subject of a correspondence heretofore communicated to you, has been acquitted by the verdict of an impartial and intelligent jury, and has under the judgment of the court been regularly discharged.

Great Britain having made known to this Government that the expedition which was fitted out from Canada for the destruction of the steamboat Caroline in the winter of 1837, and which resulted in the destruction of said boat and in the death of an American citizen, was undertaken by orders emanating from the authorities of the British Government in Canada, and demanding the discharge of McLeod upon the ground that if engaged in that expedition he did but fulfill the orders of his Government, has thus been answered in the only way in which she could be answered by a government the powers of which are distributed among its several departments by the fundamental law. Happily for the people of Great Britain, as well as those of the United States, the only mode by which an individual arraigned for a criminal offense before the courts of either can obtain his discharge is by the independent action of the judiciary and by proceedings equally familiar to the courts of both countries.

If in Great Britain a power exists in the Crown to cause to be entered a nolle prosequi, which is not the case with the Executive power of the United States upon a prosecution pending in a State court, yet there no more than here can the chief executive power rescue a prisoner from custody without an order of the proper tribunal directing his discharge. The precise stage of the proceedings at which such order may be made is a matter of municipal regulation exclusively, and not to be complained of by any other government....