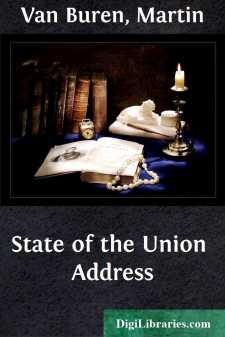 We have reason to renew the expression of our devout gratitude to the Giver of All Good for His benign protection. Our country presents on every side the evidences of that continued favor under whose auspices it, has gradually risen from a few feeble and dependent colonies to a prosperous and powerful confederacy. We are blessed with domestic tranquillity and all the elements of national prosperity. The pestilence which, invading for a time some flourishing portions of the Union, interrupted the general prevalence of unusual health has happily been limited in extent and arrested in its fatal career. The industry and prudence of our citizens are gradually relieving them from the pecuniary embarrassments under which portions of them have labored; judicious legislation and the natural and boundless resources of the country have afforded wise end timely aid to private enterprise, and the activity always characteristic of our people has already in a great degree resumed its usual and profitable channels.

The condition of our foreign relations has not materially changed since the last annual message of my predecessor. We remain at peace with all nations, and no efforts on my part consistent with the preservation of our rights and the honor of the country shall be spared to maintain a position so consonant to our institutions. We have faithfully sustained the foreign policy with which the United States, under the guidance of their first President, took their stand in the family of nations—that of regulating their intercourse with other powers by the approved principles of private life; asking and according equal rights and equal privileges; rendering and demanding justice in all cases; advancing their own and discussing the pretensions of others with candor, directness, and sincerity; appealing at all times to reason, but never yielding to force nor seeking to acquire anything for themselves by its exercise.

A rigid adherence to this policy has left this Government with scarcely a claim upon its justice for injuries arising from acts committed by its authority. The most imposing and perplexing of those of the United States upon foreign governments for aggressions upon our citizens were disposed of by my predecessor. Independently of the benefits conferred upon our citizens by restoring to the mercantile community so many millions of which they had been wrongfully divested, a great service was also rendered to his country by the satisfactory adjustment of so many ancient and irritating subjects of contention; and it reflects no ordinary credit on his successful administration of public affairs that this great object was accomplished without compromising on any occasion either the honor or the peace of the nation.

With European powers no new subjects of difficulty have arisen, and those which were under discussion, although not terminated, do not present a more unfavorable aspect for the future preservation of that good understanding which it has ever been our desire to cultivate....