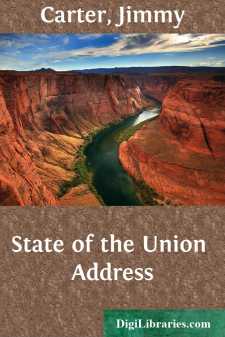 Two years ago today we had the first caucus in Iowa, and one year agotomorrow, I walked from here to the White House to take up the duties ofPresident of the United States. I didn't know it then when I walked, butI've been trying to save energy ever since.

I return tonight to fulfill one of those duties of the Constitution: to give to the Congress, and to the Nation, information on the state of the Union.

Militarily, politically, economically, and in spirit, the state of ourUnion is sound.

We are a great country, a strong country, a vital and dynamic country, and so we will remain.

We are a confident people and a hardworking people, a decent and a compassionate people, and so we will remain.

I want to speak to you tonight about where we are and where we must go, about what we have done and what we must do. And I want to pledge to you my best efforts and ask you to pledge yours.

Each generation of Americans has to face circumstances not of its own choosing, but by which its character is measured and its spirit is tested.

There are times of emergency, when a nation and its leaders must bring their energies to bear on a single urgent task. That was the duty Abraham Lincoln faced when our land was torn apart by conflict in the War Between the States. That was the duty faced by Franklin Roosevelt when he led America out of an economic depression and again when he led America to victory in war.

There are other times when there is no single overwhelming crisis, yet profound national interests are at stake.

At such times the risk of inaction can be equally great. It becomes the task of leaders to call forth the vast and restless energies of our people to build for the future.

That is what Harry Truman did in the years after the Second World War, when we helped Europe and Japan rebuild themselves and secured an international order that has protected freedom from aggression.

We live in such times now, and we face such duties.

We've come through a long period of turmoil and doubt, but we've once again found our moral course, and with a new spirit, we are striving to express our best instincts to the rest of the world.

There is all across our land a growing sense of peace and a sense of common purpose. This sense of unity cannot be expressed in programs or in legislation or in dollars. It's an achievement that belongs to every individual American. This unity ties together, and it towers over all our efforts here in Washington, and it serves as an inspiring beacon for all of us who are elected to serve.

This new atmosphere demands a new spirit, a partnership between those of us who lead and those who elect. The foundations of this partnership are truth, the courage to face hard decisions, concern for one another and the common good over special interests, and a basic faith and trust in the wisdom and strength and judgment of the American people.

For the first time in a generation, we are not haunted by a major international crisis or by domestic turmoil, and we now have a rare and a priceless opportunity to address persistent problems and burdens which come to us as a nation, quietly and steadily getting worse over the years.

As President, I've had to ask you, the Members of Congress, and you, the American people, to come to grips with some of the most difficult and hard questions facing our society....