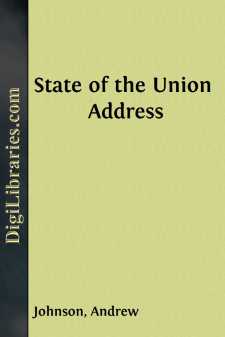 To express gratitude to God in the name of the people for the preservation of the United States is my first duty in addressing you. Our thoughts next revert to the death of the late President by an act of parricidal treason. The grief of the nation is still fresh. It finds some solace in the consideration that he lived to enjoy the highest proof of its confidence by entering on the renewed term of the Chief Magistracy to which he had been elected; that he brought the civil war substantially to a close; that his loss was deplored in all parts of the Union, and that foreign nations have rendered justice to his memory. His removal cast upon me a heavier weight of cares than ever devolved upon any one of his predecessors. To fulfill my trust I need the support and confidence of all who are associated with me in the various departments of Government and the support and confidence of the people. There is but one way in which I can hope to gain their necessary aid. It is to state with frankness the principles which guide my conduct, and their application to the present state of affairs, well aware that the efficiency of my labors will in a great measure depend on your and their undivided approbation.

The Union of the United States of America was intended by its authors to last as long as the States themselves shall last. "The Union shall be perpetual" are the words of the Confederation. "To form a more perfect Union," by an ordinance of the people of the United States, is the declared purpose of the Constitution. The hand of Divine Providence was never more plainly visible in the affairs of men than in the framing and the adopting of that instrument. It is beyond comparison the greatest event in American history, and, indeed, is it not of all events in modern times the most pregnant with consequences for every people of the earth? The members of the Convention which prepared it brought to their work the experience of the Confederation, of their several States, and of other republican governments, old and new; but they needed and they obtained a wisdom superior to experience. And when for its validity it required the approval of a people that occupied a large part of a continent and acted separately in many distinct conventions, what is more wonderful than that, after earnest contention and long discussion, all feelings and all opinions were ultimately drawn in one way to its support? The Constitution to which life was thus imparted contains within itself ample resources for its own preservation. It has power to enforce the laws, punish treason, and insure domestic tranquillity. In case of the usurpation of the government of a State by one man or an oligarchy, it becomes a duty of the United States to make good the guaranty to that State of a republican form of government, and so to maintain the homogeneousness of all. Does the lapse of time reveal defects? A simple mode of amendment is provided in the Constitution itself, so that its conditions can always be made to conform to the requirements of advancing civilization....