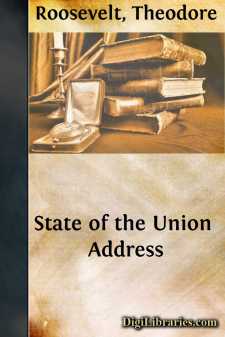 The Congress assembles this year under the shadow of a great calamity. On the sixth of September, President McKinley was shot by an anarchist while attending the Pan-American Exposition at Buffalo, and died in that city on the fourteenth of that month.

Of the last seven elected Presidents, he is the third who has been murdered, and the bare recital of this fact is sufficient to justify grave alarm among all loyal American citizens. Moreover, the circumstances of this, the third assassination of an American President, have a peculiarly sinister significance. Both President Lincoln and President Garfield were killed by assassins of types unfortunately not uncommon in history; President Lincoln falling a victim to the terrible passions aroused by four years of civil war, and President Garfield to the revengeful vanity of a disappointed office-seeker. President McKinley was killed by an utterly depraved criminal belonging to that body of criminals who object to all governments, good and bad alike, who are against any form of popular liberty if it is guaranteed by even the most just and liberal laws, and who are as hostile to the upright exponent of a free people's sober will as to the tyrannical and irresponsible despot.

It is not too much to say that at the time of President McKinley's death he was the most widely loved man in all the United States; while we have never had any public man of his position who has been so wholly free from the bitter animosities incident to public life. His political opponents were the first to bear the heartiest and most generous tribute to the broad kindliness of nature, the sweetness and gentleness of character which so endeared him to his close associates. To a standard of lofty integrity in public life he united the tender affections and home virtues which are all-important in the make-up of national character. A gallant soldier in the great war for the Union, he also shone as an example to all our people because of his conduct in the most sacred and intimate of home relations. There could be no personal hatred of him, for he never acted with aught but consideration for the welfare of others. No one could fail to respect him who knew him in public or private life. The defenders of those murderous criminals who seek to excuse their criminality by asserting that it is exercised for political ends, inveigh against wealth and irresponsible power. But for this assassination even this base apology cannot be urged.

President McKinley was a man of moderate means, a man whose stock sprang from the sturdy tillers of the soil, who had himself belonged among the wage-workers, who had entered the Army as a private soldier. Wealth was not struck at when the President was assassinated, but the honest toil which is content with moderate gains after a lifetime of unremitting labor, largely in the service of the public. Still less was power struck at in the sense that power is irresponsible or centered in the hands of any one individual....