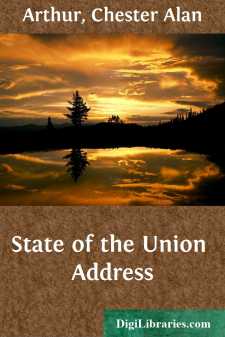 To the Senate and House of Representatives of the United States:

An appalling calamity has befallen the American people since their chosen representatives last met in the halls where you are now assembled. We might else recall with unalloyed content the rare prosperity with which throughout the year the nation has been blessed. Its harvests have been plenteous; its varied industries have thriven; the health of its people has been preserved; it has maintained with foreign governments the undisturbed relations of amity and peace. For these manifestations of His favor we owe to Him who holds our destiny in His hands the tribute of our grateful devotion.

To that mysterious exercise of His will which has taken from us the loved and illustrious citizen who was but lately the head of the nation we bow in sorrow and submission.

The memory of his exalted character, of his noble achievements, and of his patriotic life will be treasured forever as a sacred possession of the whole people.

The announcement of his death drew from foreign governments and peoples tributes of sympathy and sorrow which history will record as signal tokens of the kinship of nations and the federation of mankind.

The feeling of good will between our own Government and that of Great Britain was never more marked than at present. In recognition of this pleasing fact I directed, on the occasion of the late centennial celebration at Yorktown, that a salute be given to the British flag.

Save for the correspondence to which I shall refer hereafter in relation to the proposed canal across the Isthmus of Panama, little has occurred worthy of mention in the diplomatic relations of the two countries.

Early in the year the Fortune Bay claims were satisfactorily settled by the British Government paying in full the sum of 15,000 pounds, most of which has been already distributed. As the terms of the settlement included compensation for injuries suffered by our fishermen at Aspee Bay, there has been retained from the gross award a sum which is deemed adequate for those claims.

The participation of Americans in the exhibitions at Melbourne and Sydney will be approvingly mentioned in the reports of the two exhibitions, soon to be presented to Congress. They will disclose the readiness of our countrymen to make successful competition in distant fields of enterprise.

Negotiations for an international copyright convention are in hopeful progress.

The surrender of Sitting Bull and his forces upon the Canadian frontier has allayed apprehension, although bodies of British Indians still cross the border in quest of sustenance. Upon this subject a correspondence has been opened which promises an adequate understanding. Our troops have orders to avoid meanwhile all collisions with alien Indians.

The presence at the Yorktown celebration of representatives of the French Republic and descendants of Lafayette and of his gallant compatriots who were our allies in the Revolution has served to strengthen the spirit of good will which has always existed between the two nations....