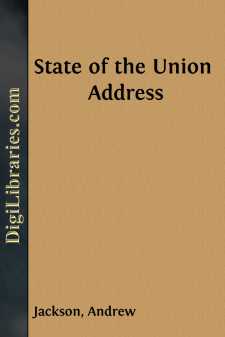 Fellow Citizens of the Senate and of the House of Representatives:

It affords me pleasure to tender my friendly greetings to you on the occasion of your assembling at the seat of Government to enter upon the important duties to which you have been called by the voice of our country-men. The task devolves on me, under a provision of the Constitution, to present to you, as the Federal Legislature of 24 sovereign States and 12,000,000 happy people, a view of our affairs, and to propose such measures as in the discharge of my official functions have suggested themselves as necessary to promote the objects of our Union.

In communicating with you for the first time it is to me a source of unfeigned satisfaction, calling for mutual gratulation and devout thanks to a benign Providence, that we are at peace with all man-kind, and that our country exhibits the most cheering evidence of general welfare and progressive improvement. Turning our eyes to other nations, our great desire is to see our brethren of the human race secured in the blessings enjoyed by ourselves, and advancing in knowledge, in freedom, and in social happiness.

Our foreign relations, although in their general character pacific and friendly, present subjects of difference between us and other powers of deep interest as well to the country at large as to many of our citizens. To effect an adjustment of these shall continue to be the object of my earnest endeavors, and not with standing the difficulties of the task, I do not allow myself to apprehend unfavorable results. Blessed as our country is with every thing which constitutes national strength, she is fully adequate to the maintenance of all her interests. In discharging the responsible trust confided to the Executive in this respect it is my settled purpose to ask nothing that is not clearly right and to submit to nothing that is wrong; and I flatter myself that, supported by the other branches of the Government and by the intelligence and patriotism of the people, we shall be able, under the protection of Providence, to cause all our just rights to be respected.

Of the unsettled matters between the United States and other powers, the most prominent are those which have for years been the subject of negotiation with England, France, and Spain. The late periods at which our ministers to those Governments left the United States render it impossible at this early day to inform you of what has been done on the subjects with which they have been respectively charged. Relying upon the justice of our views in relation to the points committed to negotiation and the reciprocal good feeling which characterizes our intercourse with those nations, we have the best reason to hope for a satisfactory adjustment of existing differences.

With Great Britain, alike distinguished in peace and war, we may look forward to years of peaceful, honorable, and elevated competition. Every thing in the condition and history of the two nations is calculated to inspire sentiments of mutual respect and to carry conviction to the minds of both that it is their policy to preserve the most cordial relations....