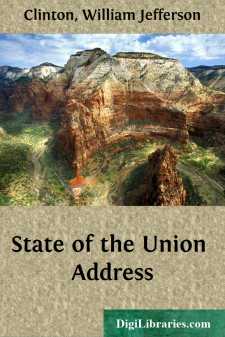 I am not sure what speech is in the TelePrompTer tonight, but I hope we can talk about the State of the Union.

I ask you to begin by recalling the memory of the giant who presided over this chamber with such force and grace. Tip O'Neill liked to call himself "A Man of the House" and he surely was that. But even more, he was a man of the people, a bricklayer's son who helped to build the great American middle class. Tip O'Neill never forgot who he was, where he came from, or who sent him here. Tonight he's smiling down on us for the first time from the Lord's gallery. But in his honor, may we too also remember who we are, where we come from, and who sent us here.

If we do that we will return over and over again to the principle that if we simply give ordinary people equal opportunity, quality education, and a fair shot at the American dream, they will do extraordinary things.

We gather tonight in a world of changes so profound and rapid that all nations are tested. Our American heritage has always been to master such change, to use it to expand opportunity at home, and our leadership abroad. But for too long and in too many ways, that heritage was abandoned, and our country drifted.

For 30 years family life in America has been breaking down. For 20 years the wages of working people have been stagnant or declining. For the 12 years of trickle down economics we built a false prosperity on a hollow base as our national debt quadrupled. From 1989 to 1992 we experienced the slowest growth in a half century. For too many families, even when both parents were working, the American dream has been slipping away.

In 1992 the American people demanded that we change. I year ago I asked all of you to join me in accepting responsibility for the future of our country.

Well, we did. We replaced drift and deadlock with renewal and reform. And I want to thank every one of you here who heard the American people, who broke gridlock, who gave them the most successful teamwork between a president and a Congress in 30 years.

And thank you, Jim Brady, for being here, and God bless you, Sarah. This Congress produced tax cuts to reduce the taxes of nine out of 10 small businesses who use the money to invest more and create more jobs. It produced more research and treatment for AIDS, more childhood immunizations, more support for women's health research, more affordable college loans for the middle class, a new national service program for those who want to give something back to their country and their communities for higher education, a dramatic increase in high-tech investments to move us from a defense to a domestic high-tech economy. This Congress produced a new law—the motor voter bill—to help millions of people register to vote....