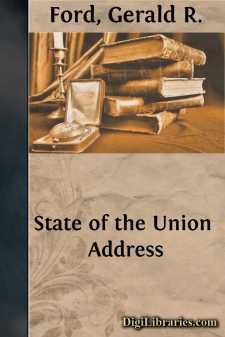 Twenty-six years ago, a freshman Congressman, a young fellow with lots of idealism who was out to change the world, stood before Sam Rayburn in the well of the House and solemnly swore to the same oath that all of you took yesterday—an unforgettable experience, and I congratulate you all.

Two days later, that same freshman stood at the back of this great Chamber—over there someplace—as President Truman, all charged up by his single-handed election victory, reported as the Constitution requires on the state of the Union.

When the bipartisan applause stopped, President Truman said, "I am happy to report to this 81st Congress that the state of the Union is good. Our Nation is better able than ever before to meet the needs of the American people, and to give them their fair chance in the pursuit of happiness. [It] is foremost among the nations of the world in the search for peace."

Today, that freshman Member from Michigan stands where Mr. Truman stood, and I must say to you that the state of the Union is not good:

Millions of Americans are out of work.

Recession and inflation are eroding the money of millions more.

This year's Federal deficit will be about $30 billion; next year's probably $45 billion.

The national debt will rise to over $500 billion.

Our plant capacity and productivity are not increasing fast enough.

We depend on others for essential energy.

Some people question their Government's ability to make hard decisions and stick with them; they expect Washington politics as usual.

Yet, what President Truman said on January 5, 1949, is even more true in 1975. We are better able to meet our people's needs. All Americans do have a fairer chance to pursue happiness. Not only are we still the foremost nation in the pursuit of peace but today's prospects of attaining it are infinitely brighter.

There were 59 million Americans employed at the start of 1949; now there are more than 85 million Americans who have jobs. In comparable dollars, the average income of the American family has doubled during the past 26 years.

Now, I want to speak very bluntly. I've got bad news, and I don't expect much, if any, applause. The American people want action, and it will take both the Congress and the President to give them what they want. Progress and solutions can be achieved, and they will be achieved.

My message today is not intended to address all of the complex needs of America. I will send separate messages making specific recommendations for domestic legislation, such as the extension of general revenue sharing and the Voting Rights Act.

The moment has come to move in a new direction. We can do this by fashioning a new partnership between the Congress on the one hand, the White House on the other, and the people we both represent.

Let us mobilize the most powerful and most creative industrial nation that ever existed on this Earth to put all our people to work. The emphasis on our economic efforts must now shift from inflation to jobs....