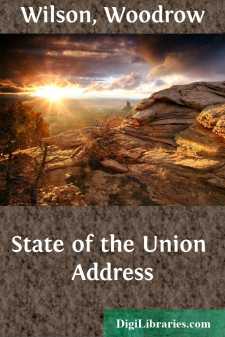 Gentlemen of the Congress:

In pursuance of my constitutional duty to "give to the Congress information of the state of the Union," I take the liberty of addressing you on several matters which ought, as it seems to me, particularly to engage the attention of your honorable bodies, as of all who study the welfare and progress of the Nation.

I shall ask your indulgence if I venture to depart in some degree from the usual custom of setting before you in formal review the many matters which have engaged the attention and called for the action of the several departments of the Government or which look to them for early treatment in the future, because the list is long, very long, and would suffer in the abbreviation to which I should have to subject it. I shall submit to you the reports of the heads of the several departments, in which these subjects are set forth in careful detail, and beg that they may receive the thoughtful attention of your committees and of all Members of the Congress who may have the leisure to study them. Their obvious importance, as constituting the very substance of the business of the Government, makes comment and emphasis on my part unnecessary.

The country, I am thankful to say, is at peace with all the world, and many happy manifestations multiply about us of a growing cordiality and sense of community of interest among the nations, foreshadowing an age of settled peace and good will. More and more readily each decade do the nations manifest their willingness to bind themselves by solemn treaty to the processes of peace, the processes of frankness and fair concession. So far the United States has stood at the front of such negotiations. She will, I earnestly hope and confidently believe, give fresh proof of her sincere adherence to the cause of international friendship by ratifying the several treaties of arbitration awaiting renewal by the Senate. In addition to these, it has been the privilege of the Department of State to gain the assent, in principle, of no less than 31 nations, representing four-fifths of the population of the world, to the negotiation of treaties by which it shall be agreed that whenever differences of interest or of policy arise which can not be resolved by the ordinary processes of diplomacy they shall be publicly analyzed, discussed, and reported upon by a tribunal chosen by the parties before either nation determines its course of action.

There is only one possible standard by which to determine controversies between the United States and other nations, and that is compounded of these two elements: Our own honor and our obligations to the peace of the world. A test so compounded ought easily to be made to govern both the establishment of new treaty obligations and the interpretation of those already assumed.

There is but one cloud upon our horizon. That has shown itself to the south of us, and hangs over Mexico. There can be no certain prospect of peace in America until Gen. Huerta has surrendered his usurped authority in Mexico; until it is understood on all hands, indeed, that such pretended governments will not be countenanced or dealt with by-the Government of the United States....