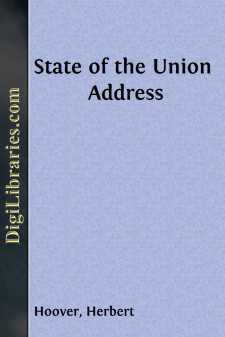 The Constitution requires that the President "shall, from time to time, give to the Congress information of the state of the Union, and recommend to their consideration such measures as he shall judge necessary and expedient." In complying with that requirement I wish to emphasize that during the past year the Nation has continued to grow in strength; our people have advanced in comfort; we have gained in knowledge; the education of youth has been more widely spread; moral and spiritual forces have been maintained; peace has become more assured. The problems with which we are confronted are the problems of growth and of progress. In their solution we have to determine the facts, to develop the relative importance to be assigned to such facts, to formulate a common judgment upon them, and to realize solutions in spirit of conciliation.

We are not only at peace with all the world, but the foundations for future peace are being substantially strengthened. To promote peace is our long-established policy. Through the Kellogg-Briand pact a great moral standard has been raised in the world. By it fifty-four nations have covenanted to renounce war and to settle all disputes by pacific means. Through it a new world outlook has been inaugurated which has profoundly affected the foreign policies of nations. Since its inauguration we have initiated new efforts not only in the organization of the machinery of peace but also to eliminate dangerous forces which produce controversies amongst nations.

In January, 1926, the Senate gave its consent to adherence to the Court of International Justice with certain reservations. In September of this year the statute establishing the court has, by the action of the nations signatory, been amended to meet the Senate's reservations and to go even beyond those reservations to make clear that the court is a true international court of justice. I believe it will be clear to everyone that no controversy or question in which this country has or claims an interest can be passed on by the court without our consent at the time the question arises. The doubt about advisory opinions has been completely safeguarded. Our adherence to the International Court is, as now constituted, not the slightest step toward entry into the League of Nations. As I have before indicated, I shall direct that our signature be affixed to the protocol of adherence and shall submit it for the approval of the Senate with a special message at some time when it is convenient to deal with it.

In the hope of reducing friction in the world, and with the desire that we may reduce the great economic burdens of naval armament, we have joined in conference with Great Britain, France, Italy, and Japan to be held in London in January to consider the further limitation and reduction of naval arms. We hold high hopes that success may attend this effort.

At the beginning of the present administration the neighboring State of Mexico was best with domestic insurrection....