Stand By The Union 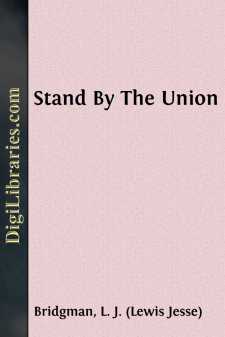 CHAPTER I A MYSTERIOUS VISITATION

"Who's there?" demanded Christy Passford, sitting up in his bed, in the middle of the night, in his room on the second floor of his father's palatial mansion on the Hudson, where the young lieutenant was waiting for a passage to the Gulf.

There was no answer to his inquiry.

"Who's there?" he repeated in a louder tone.

All was as still as it ought to be in the middle of the night, and no response came to his second inquiry. The brilliant young officer, who had just passed his eighteenth birthday, knew what it was even better than an older person to pass a whole night on difficult duty, without a wink of sleep, for he had been accustomed to spend a portion of every night in planking the deck on his watch; but at Bonnydale, his quiet home, far removed from the scenes of actual conflict, he was an industrious sleeper, giving his whole attention to his slumbers, as a proper preparation for the stirring scenes in which he was again about to engage.

He slept soundly; but he had dreamed that some one opened the door of his room, or some one had actually done so. He was not a believer in dreams, and when an impression had fastened itself upon his mind, he was inclined to investigate it. It seemed to him that he had been awakened from his sleep by the opening of the door of his chamber. Some member of the family might be sick, and he might be needed to go for the doctor, or for some other service.

He leaped from his bed when no answer came to his second demand, lighted his lamp, and put on his trousers. With the light in his hand, he opened the door; but there was no one there, and not a sound of any kind could be heard. He walked about the hall in his bare feet, and listened attentively at the doors of several of the chambers, especially at that of Mr. Pembroke, the invalid gentleman whom, with his daughter, he had brought home as a passenger in the captured Vixen.

Christy heard nothing, and he silently descended the stairs to the lower hall. All was as quiet there as upon the floor above, and he had begun to think that the impression he had received had been given him in a dream, though he could not remember that he had been dreaming. But when he came to the front door, he found it was ajar. It was usually secured by a spring lock, and those who were liable to be out in the evening were provided with night-keys.

At the present time his father was in Washington, and he could not have neglected to close the door. He had been to the railroad station to meet the last train, thinking it possible that his father might return, and he was confident that he had been the last to enter the house. He was very sure that he had not left the door unfastened, and this assurance made him confident that some person had entered the house. The noise at the door of his chamber was not an illusion or a dream: though it had been made by closing rather than by opening it, or he would have been likely to find the intruder in his room when he lighted his lamp....