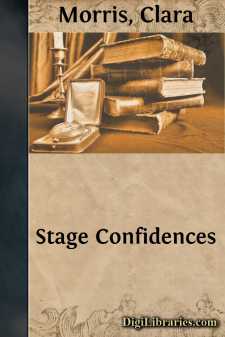 Every actress of prominence receives letters from young girls and women who wish to go on the stage, and I have my share. These letters are of all kinds. Some are extravagant, some enthusiastic, some foolish, and a few unutterably pathetic; but however their writers may differ otherwise, there is one positive conviction they unconsciously share, and there is one question they each and every one put to me: so it is that question that must be first answered, and that conviction that must be shaken.

The question is, "What chance has a girl in private life of getting on the stage?" and to reply at once with brutal truthfulness and straight to the point, I must say, "Almost none."

But to answer her instant "Why?" I must first shake that positive conviction each writer has, that she is the only one that burns with the high ambition to be an actress, who hopes and fears, and secretly studies Juliet. It would be difficult to convince her that her own state, her own city, yes, her own block, could each produce a girl who firmly believes that her talent is equally great, and who has just the same strength of hope for the future stage existence.

Every city in the country is freely sprinkled with stage-loving, or, as they are generally termed, "stage-struck" girls. It is more than probable that at least a half-dozen girls in her own circle secretly cherish a hope for a glorious career on the stage, while her bosom friend most likely knows every line of Pauline and has practised the death scene of Camille hundreds of times. Surely, then, the would-be actresses can see that their own numbers constitute one of the greatest obstacles in their path.

But that is by no means all. Figures are always hard things to manage, and there is another large body of them, between a girl and her chances, in the number of trained actresses who are out of engagements. There is probably no profession in the world so overcrowded as is the profession of acting. "Why, then," the manager asks, "should I engage a girl who does not even know how to walk across the stage, when there are so many trained girls and women to choose from?"

"But," says or thinks some girl who reads these words, "you were an outsider, poor and without friends, yet you got your chance."

Very true; I did. But conditions then were different. The stage did not hold then the place in public estimation which it now does. Theatrical people were little known and even less understood. Even the people who did not think all actors drunkards and all actresses immoral, did think they were a lot of flighty, silly buffoons, not to be taken seriously for a moment. The profession, by reason of this feeling, was rather a close corporation. The recruits were generally young relatives of the older actors. There was plenty of room, and people began at the bottom quite cheerfully and worked up. When a "ballet" was wanted, the manager advertised for extra girls, and sometimes received as many as three applicants in one day—when twenty were wanted....