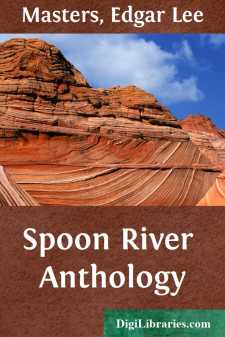 Where are Elmer, Herman, Bert, Tom and Charley,  The weak of will, the strong of arm, the clown, the boozer, the fighter?  All, all are sleeping on the hill.

Where are Ella, Kate, Mag, Lizzie and Edith,  The tender heart, the simple soul, the loud, the proud, the happy one?—  All, all are sleeping on the hill.

One died in shameful child-birth,  One of a thwarted love,  One at the hands of a brute in a brothel,  One of a broken pride, in the search for heart's desire;  One after life in far-away London and Paris  Was brought to her little space by Ella and Kate and Mag—  All, all are sleeping, sleeping, sleeping on the hill.

Where are Uncle Isaac and Aunt Emily,  And old Towny Kincaid and Sevigne Houghton,  And Major Walker who had talked  With venerable men of the revolution?—  All, all are sleeping on the hill.

They brought them dead sons from the war,  And daughters whom life had crushed,  And their children fatherless, crying—  All, all are sleeping, sleeping, sleeping on the hill.  Where is Old Fiddler Jones  Who played with life all his ninety years,  Braving the sleet with bared breast,  Drinking, rioting, thinking neither of wife nor kin,  Nor gold, nor love, nor heaven?  Lo! he babbles of the fish-frys of long ago,  Of the horse-races of long ago at Clary's Grove,  Of what Abe Lincoln said  One time at Springfield.

HERE I lie close to the grave  Of Old Bill Piersol,  Who grew rich trading with the Indians, and who  Afterwards took the Bankrupt Law  And emerged from it richer than ever  Myself grown tired of toil and poverty  And beholding how Old Bill and other grew in wealth  Robbed a traveler one Night near Proctor's Grove,  Killing him unwittingly while doing so,  For which I was tried and hanged.  That was my way of going into bankruptcy.  Now we who took the bankrupt law in our respective ways  Sleep peacefully side by side.

Have you seen walking through the village  A Man with downcast eyes and haggard face?  That is my husband who, by secret cruelty  Never to be told, robbed me of my youth and my beauty;  Till at last, wrinkled and with yellow teeth,  And with broken pride and shameful humility,  I sank into the grave.  But what think you gnaws at my husband's heart?  The face of what I was, the face of what he made me!  These are driving him to the place where I lie.  In death, therefore, I am avenged.

She took my strength by minutes,  She took my life by hours,  She drained me like a fevered moon  That saps the spinning world.  The days went by like shadows,  The minutes wheeled like stars....