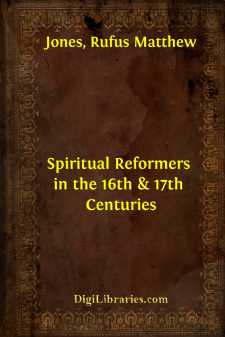 There is no magic in words, though, it must be confessed, they often exercise a psychological influence so profound and far-reaching that they seem to possess a miracle-working efficacy. Some persons live all their lives under the suggestive spell of certain words, and it sometimes happens that an entire epoch is more or less dominated by the mysterious fascination of a sacred word, which needs only to be spoken on the house-top to set hearts beating and legs marching.

"Spiritual" has always been one of these wonder-working words. St. Paul, in Christian circles, was the first to give the word its unique value. For him it named a new order of life and a new level of being. In his thought, a deep cleavage runs through the human race and divides it into two sharply-sundered classes, "psychical men" and "pneumatical men"—men who live according to nature, and men who live by the life of the Spirit. The former class, that is psychical men, are of the earth earthy; they are, as we should say to-day, empirical, parts of a vast nature-system, doomed, as is the entire system, to constant flux and mutability and eventually to irretrievable wreck and ruin; the natural, psychical, corruptible man cannot inherit incorruption.[1] On the other hand, the pneumatical or spiritual man {xii} "puts on" incorruption and immortality. He is a member of a new order; he is "heavenly," a creation "not made with hands," but wrought out of the substance of the spiritual world, and furnished with the inherent capacity of eternal duration, so that "mortality is swallowed up of life."[2]

This word, thus made sacred by St. Paul's great use of it to designate the new race of the saved, was made the bearer in the Johannine writings of a no less exalted message, which has become a living and indissoluble part of the religious consciousness of the Christian world. "Eternal life"—or, what in these writings is the same thing, "life"—comes through the reception of the Spirit, in a birth from above. "That which is born of the flesh is flesh, and that which is born of the Spirit is Spirit."[3] When the Spirit comes as the initiator of this abundant life, then we "know that we abide in Him and He in us, because He hath given us of His Spirit," and it becomes possible for the Spirit-led person to be guided "into all the truth," to "love even as He loved," and to "overcome the world."[4] Here, again, the human race is divided into those who have "received of the Spirit," and those who have not so received; those who are "born from above" and those who have had only a natural birth; the twice-born and the once-born; those who are "of the Spirit," i.e. spiritual, and those who are "of this world," i.e. empirical.

The Gnostic Sects of the second century had one common link and badge; they all proposed a "way," often bizarre and strange-sounding to modern ears, by which the soul, astray, lost, encumbered, or imprisoned in matter, might attain its freedom and become spiritual. Most of the Gnostic teachers, who in their flourishing time were as thick as thistle-downs in summer, conceived of man as consisting of two "halves" which corresponded with two totally different world-orders. There was in man, or there belonged to man (1) a visible body, which {xiii} was again dichotomized, and believed to be composed, according to many of the Gnostics, of a subtle element like that of which they supposed Adam in his unfallen state was made, which they named the hylic body, and a sheath of gross earthly matter which they called the choical body.[5] There was also (2) another, invisible, "half," generally divided into lower and higher stories....