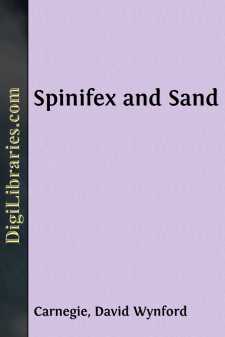 CHAPTER I Early Days In The Colony

In the month of September, 1892, Lord Percy Douglas (now Lord Douglas of Hawick) and I, found ourselves steaming into King George's Sound—that magnificent harbour on the south-west coast of Western Australia—building castles in the air, discussing our prospects, and making rapid and vast imaginary fortunes in the gold-mines of that newly-discovered land of Ophir. Coolgardie, a district then unnamed, had been discovered, and Arthur Bayley, a persevering and lucky prospector, had returned to civilised parts from the “bush,” his packhorses loaded with golden specimens from the famous mine which bears his name. I suppose the fortunate find of Bayley and his mate, Ford, has turned the course of events in the lives of many tens of thousands of people, and yet, as he jogged along the track from Gnarlbine Rock to Southern Cross, I daresay his thoughts reverted to his own life, and the good time before him, rather than to moralising on the probable effect of his discovery on others.

We spent as little time as possible at Albany, or, I should say, made our stay as short as was permitted, for in those days the convenience of the passenger was thought little of, in comparison with the encouragement of local industries, so that mails and travellers alike were forced to remain at least one night in Albany by the arrangement of the train service, greatly to the benefit of the hotel-keepers.

We were somewhat surprised to see the landlord's daughters waiting at table. They were such tremendously smart and icy young ladies that at first we were likely to mistake them for guests; and even when sure of their identity we were too nervous to ask for anything so vulgar as a pot of beer, or to expect them to change our plates.

Between Albany and Perth the country is not at all interesting being for the most part flat, scrubby, and sandy, though here and there are rich farming and agricultural districts. Arrived at Perth we found ourselves a source of great interest to the inhabitants, inasmuch as we announced our intention of making our way to the goldfields, while we had neither the means nor apparently the capability of getting there. Though treated with great hospitality, we found it almost impossible to get any information or assistance, all our inquiries being answered by some scoffing remark, such as, “Oh, you'll never get there!”

We attended a rather remarkable dinner—given in honour of the Boot, Shoe, Harness, and Leather trade, at the invitation of a fellow-countryman in the trade, and enjoyed ourselves immensely; speech-making and toast-drinking being carried out in the extensive style so customary in the West. Picture our surprise on receiving a bill for 10s. 6d. next morning! Our friend of the dinner, kindly put at our disposal a hansom cab which he owned, but this luxury we declined with thanks, fearing a repetition of his “bill-by-invitation.”

Owing to the extreme kindness of Mr....