Speed the Plough A Comedy, In Five Acts; As Performed At The Theatre Royal, Covent Garden 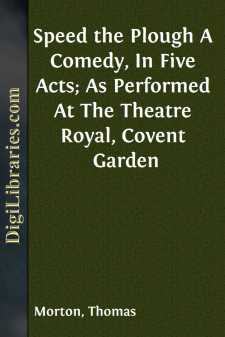 This comedy excites that sensation, which is the best security for the success of a drama—curiosity. After the two first acts are over, and pleasantly over, with the excellent drawn characters of Ashfield and his wife, and the very just satire which arises from Sir Abel's propensity to modern improvements—the acts that follow excite deep interest and ardent expectation; both of which are so highly gratified at the conclusion of the play, that, from the first night of its performance, it has ranked among the best of the author's productions, and in the first class of modern comedies.

The various characters of this play are admirably designed, but not so happily finished as the author meant them to be—witness, Bob Handy, who begins a self-conceited coxcomb, and ends a tragedy confidant.

But the good intentions of an author are acceptable: execution will not always follow conception; and the last may often give as much instruction, though not equal delight with the former: as an instance, who does not see the folly of attempting to do every thing in Handy, though he is more the shadow, than the substance of a character.

Notwithstanding there are some parts, not so good as others, in this comedy, there is no one character superior to the rest, nor any one in particular, which makes a forcible impression on the memory:—this proves, (in consequence of the acknowledged merit of the play) the fable to be a good one, and that a pleasing combination has been studied and effected by the author, with infinite skill, however incompetent to his own brilliant imagination.

The plot, and serious characters of this comedy, are said to be taken from a play of Kotzebue's, called, "The Duke of Burgundy,"—if they are, Mr. Morton's ingenuity of adapting them to our stage has been equal to the merit he would have had in conceiving them; for that very play called, "The Duke of Burgundy," by some verbal translator,—was condemned or withdrawn at Covent Garden Theatre, not very long before "Speed the Plough" was received with the highest marks of admiration.

The characters of Sir Philip Blandford, his brother, and his nephew, may have been imported from Germany, but surely, all the other personages of the drama are of pure English growth.

The reception of this play, when first performed, and the high station it still holds in the public opinion, should make criticism cautious of attack—but as works of genuine art alone are held worthy of investigation, and as all examinations tend to produce a degree of censure, as well as of praise, "Speed the Plough" is not exempt from the general lot of every favourite production.

An auditor will be much better pleased with this play, than a reader; for though it is well written, and interspersed with many poetical passages, an attentive peruser will find inconsistencies in the arrangement of the plot and incidents, which an audience, absorbed in expectation of final events, and hurried away by the charm of scenic interest, cannot easily detect.

The most prominent of these blemishes are:—Miss Blandford falls in love with a plough-boy at first-sight, which she certainly would not have done, but that some preternatural agent whispered to her, he was a young man of birth. But whether this magical information came from the palpitation of her heart, or the quickness of her eye, she has not said.—A reader will, however, gladly impute the cause of her sudden passion to magic, rather than to the want of female refinement.

The daughter has not less decorum in love, than the father in murder.—That a character, grave and stern, as Sir Philip Blandford is described, should entrust any man, especially such a man as Bob Handy, with a secret, on which, not only his reputation, but his life depended, can upon no principle of reason be accounted for; unless the author took into consideration, what has sometimes been observed,—that a murderer, in contrivance to conceal his guilt, foolishly fixes on the very means, which bring him to conviction.