Spectra A Book of Poetic Experiments 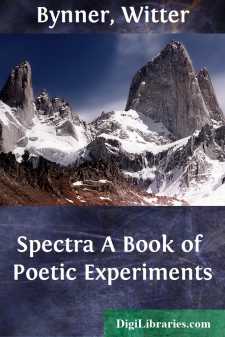 THIS volume is the first compilation of the recent experiments in Spectra. It is the aim of the Spectric group to push the possibilities of poetic expression into a new region,—to attain a fresh brilliance of impression by a method not so wholly different from the methods of Futurist Painting.

An explanation of the term "Spectric" will indicate something of the nature of the technique which it describes. "Spectric" has, in this connection, three separate but closely related meanings. In the first place, it speaks, to the mind, of that process of diffraction by which are disarticulated the several colored and other rays of which light is composed. It indicates our feeling that the theme of a poem is to be regarded as a prism, upon which the colorless white light of infinite existence falls and is broken up into glowing, beautiful, and intelligible hues. In its second sense, the term Spectric relates to the reflex vibrations of physical sight, and suggests the luminous appearance which is seen after exposure of the eye to intense light, and, by analogy, the after-colors of the poet's initial vision. In its third sense, Spectric connotes the overtones, adumbrations, or spectres which for the poet haunt all objects both of the seen and the unseen world,—those shadowy projections, sometimes grotesque, which, hovering around the real, give to the real its full ideal significance and its poetic worth. These spectres are the manifold spell and true essence of objects,—like the magic that would inevitably encircle a mirror from the hand of Helen of Troy.

Just as the colors of the rainbow recombine into a white light,—just as the reflex of the eye's picture vividly haunts sleep,—just as the ghosts which surround reality are the vital part of that existence,—so may the Spectric vision, if successful, synthesize, prolong, and at the same time multiply the emotional images of the reader. The rays which the poet has dissociated into colorful beauty should recombine in the reader's brain into a new intensity of unified brilliance. The reflex of the poet's sight should sustain the original perception with a haunting keenness. The insubstantiality of the poet's spectres should touch with a tremulous vibrancy of ultimate fact the reader's sense of the immediate theme.

If the Spectrist wishes to describe a landscape, he will not attempt a map, but will put down those winged emotions, those fantastic analogies, which the real scene awakens in his own mind. In practice this will be found to be the vividest of all modes of communication, as the touch of hands quickens a mere exchange of names.

It may be noted that to Spectra, to these reflected experiences of life, as we perceive them, adheres often a tinge of humor. Occidental art, in contrast to art in the Orient, has until lately been afraid of the flash of humor in its serious works. But a growing acquaintance with Chinese painting is surely liberating in our poets and painters a happy sense of the disproportion of man to his assumed place in the universe, a sense of the tortuous grotesque vanity of the individual....