Special Report on Diseases of the Horse 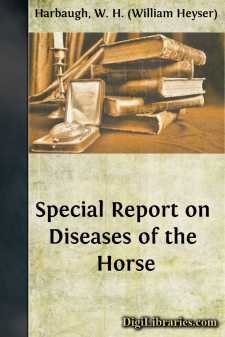 In the examination of a sick horse it is important to have a method or system. If a definite plan of examination is followed one may feel reasonably sure, when the examination is finished, that no important point has been overlooked and that the examiner is in a position to arrive at an opinion that is as accurate as is possible for him. Of course, an experienced eye can see, and a trained hand can feel, slight alterations or variations from the normal that are not perceptible to the unskilled observer. A thorough knowledge of the conditions that exist in health is of the highest importance, because it is only by a knowledge of what is right that one can surely detect a wrong condition. A knowledge of anatomy, or of the structure of the body, and of physiology, or the functions and activities of the body, lie at the bottom of accuracy of diagnosis. It is important to remember that animals of different races or families deport themselves differently under the influence of the same disease or pathological process. The sensitive and highly organized thoroughbred resists cerebral depression more than does the lymphatic draft horse. Hence a degree of fever that does not produce marked dullness in a thoroughbred may cause the most abject dejection in a coarsely bred, heavy draft horse. This and similar facts are of vast importance in the diagnosis of disease and in the recognition of its significance.

The order of examination, as given hereafter, is one that has proved to be comparatively easy of application and sufficiently thorough for the purpose of the readers of this work, and is recommended by several writers.

It is important to know, first of all, something of the origin and development of the disease; therefore the cause should be looked for. The cause of a disease is important, not only in connection with diagnosis, but also in connection with treatment. The character of feed that the horse has had, the use to which he has been put, and the kind of care he has received should all be closely inquired into. It may be found by this investigation that the horse has been fed on damaged feed, such as brewers' grains or moldy silage, and this may be sufficient to explain the profound depression and weakness that are characteristic of forage poisoning. If it is learned that the horse has been kept in the stable without exercise for several days and upon full rations, and that he became suddenly lame in his back and hind legs, and finally fell to the ground from what appeared to be partial paralysis, this knowledge, taken in connection with a few evident symptoms, will be enough to establish a diagnosis of azoturia (excess of nitrogen in the urine). If it is learned that the horse has been recently shipped in the cars or has been through a dealer's stable, we have knowledge of significance in connection with the causation of a possible febrile disease, which is, under these conditions, likely to prove to be influenza, or edematous pneumonia.

It is also important to know whether the particular horse under examination is the only one in the stable, or on the premises, that is similarly afflicted. If it is found that several horses are afflicted much in the same way, we have evidence of a common cause of disease which may prove to be of an infectious nature.

Another item of importance in connection with the history of the case relates to the treatment that the horse may have had before he is examined. It sometimes happens that medicine given in excessive quantities produces symptoms resembling those of disease, so it is important that the examiner be fully informed as to the medication that has been employed.

Before beginning the special examination, attention should be paid to the attitude and general condition of the animal. Sometimes horses assume positions that are characteristic of a certain disease. For example, in tetanus (lockjaw) the muscles of the face, neck, and shoulders are stiff and rigid, as well as the muscles of the jaw. This condition produces a peculiar attitude, that once seen is subsequently recognized as rather characteristic of the disease. A horse with tetanus stands with his muscles tense and his legs in a somewhat bracing position, as though he were gathered to repel a shock. The neck is stiff and hard, the head is slightly extended upon it, and the face is drawn, and the nostrils are dilated....