Special Report on Diseases of Cattle 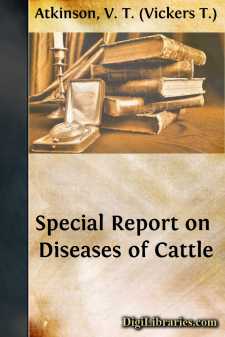 Medicines may be administered to cattle in many ways. The channel and method of administration depend on whether a general or local effect is desired, the condition of the animal, and the nature of the medicine that is to be given. The easiest method, and therefore the most common, is to give ordinary remedies by the mouth with the food, with drink, or separately. There, are, however, some conditions in which medicines administered in this way will not act promptly enough, or wherein a desired effect of the medicine on a distant part of the body is wholly lacking unless it is applied in some other way.

The various methods of administering medicines to cattle will be considered below.

By the mouth.—The simplest way to give medicines by the mouth is to mix them with the food or water. This can be done when the medicine is in the form of a powder or fluid, if but a small quantity is to be given, if it does not have a taste that is disagreeable to the animal and is not so irritant as to injure the lining membranes of the mouth and throat.

The usual method of administering bulky or unpalatable doses is to mix them with a fluid vehicle, such as water, milk, molasses, or broth, and give from a bottle. A dose given in this way is known as a "drench." In administering a drench the head of the animal should be elevated a little by an assistant. This is best accomplished when standing on the left side of the cow's head and by grasping the nose with the thumb and fingers of the right hand inserted in the nostrils; with the left hand beneath the chin the head is further raised and supported. If the animal is unruly, it may be tied in a stall or placed in a stanchion. The medicine can now be poured into the mouth by inserting the neck of the bottle between the lips on the right side. Care must be taken to avoid getting the bottle between the back teeth. The mouth of the bottle should be inserted as far as the middle of the tongue and the contents poured slowly. If the cow coughs, the head must at once be lowered to permit the fluid to escape from the larynx. If medicine is given during coughing, some of the dose may pass down the windpipe to the lungs and cause a severe or a fatal pneumonia. This is especially to be guarded against when the throat is partly paralyzed or insensitive, as in parturient paresis (milk fever). In this disease it has often happened that drenches have been poured into the lungs, thus killing the cow.

The quantity of fluid to be given in a drench depends upon the effect desired and the nature of the medicine. In impactions of the stomach very large quantities of fluid may be given—as much as a gallon or several gallons at a time. Usually, however, it is not customary or desirable to give more than from 1 to 2 quarts at a dose, and not more than a pint unless it is necessary on account of the irritant quality of the drug that has to be shielded with a large quantity of the vehicle.

Balls are large pills adapted for the larger animals. Powders or gums are sometimes mixed with an adhesive substance and rolled into balls for the purpose of convenience of administration. Balls are not used so much and are not so well adapted to the medication of cattle as of horses. The process of solution is slower in the paunch of a cow than in the stomach of a horse; if the cow is so sick as to have stopped ruminating, a ball may get covered up and lost in the mass of material in the paunch and so lie for days, producing no effect whatever....