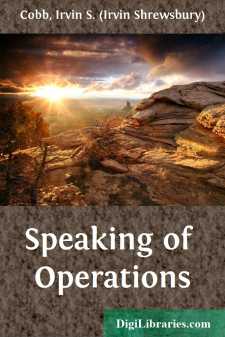 Now that the last belated bill for services professionally rendered has been properly paid and properly receipted; now that the memory of the event, like the mark of the stitches, has faded out from a vivid red to a becoming pink shade; now that I pass a display of adhesive tape in a drug-store window without flinching—I sit me down to write a little piece about a certain matter—a small thing, but mine own—to wit, That Operation.

For years I have noticed that persons who underwent pruning or remodeling at the hands of a duly qualified surgeon, and survived, like to talk about it afterward. In the event of their not surviving I have no doubt they still liked to talk about it, but in a different locality. Of all the readily available topics for use, whether among friends or among strangers, an operation seems to be the handiest and most dependable. It beats the Tariff, or Roosevelt, or Bryan, or when this war is going to end, if ever, if you are a man talking to other men; and it is more exciting even than the question of how Mrs. Vernon Castle will wear her hair this season, if you are a woman talking to other women.

For mixed companies a whale is one of the best and the easiest things to talk about that I know of. In regard to whales and their peculiarities you can make almost any assertion without fear of successful contradiction. Nobody ever knows any more about them than you do. You are not hampered by facts. If someone mentions the blubber of the whale and you chime in and say it may be noticed for miles on a still day when the large but emotional creature has been moved to tears by some great sorrow coming into its life, everybody is bound to accept the statement. For after all how few among us really know whether a distressed whale sobs aloud or does so under its breath? Who, with any certainty, can tell whether a mother whale hatches her own egg her own self or leaves it on the sheltered bosom of a fjord to be incubated by the gentle warmth of the midnight sun? The possibilities of the proposition for purposes of informal debate, pro and con, are apparent at a glance.

The weather, of course, helps out amazingly when you are meeting people for the first time, because there is nearly always more or less weather going on somewhere and practically everybody has ideas about it. The human breakfast is also a wonderfully good topic to start up during one of those lulls. Try it yourself the next time the conversation seems to drag. Just speak up in an offhand kind of way and say that you never care much about breakfast—a slice of toast and a cup of weak tea start you off properly for doing a hard day's work. You will be surprised to note how things liven up and how eagerly all present join in. The lady on your left feels that you should know she always takes two lumps of sugar and nearly half cream, because she simply cannot abide hot milk, no matter what the doctors say. The gentleman on your right will be moved to confess he likes his eggs boiled for exactly three minutes, no more and no less. Buckwheat cakes and sausage find a champion and oatmeal rarely lacks a warm defender.

But after all, when all is said and done, the king of all topics is operations. Sooner or later, wherever two or more are gathered together it is reasonably certain that somebody will bring up an operation.

Until I passed through the experience of being operated on myself, I never really realized what a precious conversational boon the subject is, and how great a part it plays in our intercourse with our fellow beings on this planet....