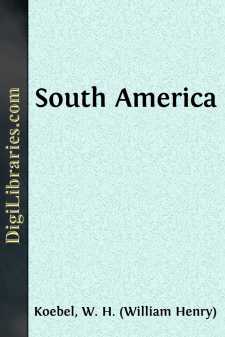 CHAPTER I THE CONTINENT IN PRE-SPANISH DAYS

The discovery of South America stands as one of the most dramatic events in history. From the time of its occurrence until the present so deeply has this event impressed itself on men's minds that the previous state of the Continent has been a somewhat neglected topic. The Incas and their civilization, it is true, have attracted no small share of attention to themselves, and the subject has become more or less familiar to the average English reader through the medium of the work of Prescott, who has been followed by a number of later writers, many of whom have dealt very exhaustively with this subject. Yet, after all, the Incas, for all their historical importance, occupied but a very small portion of the territories of the Southern Continent. Beyond the western fringe of the Continent which was theirs by heritage, or by conquest, were other lands—mountainous in parts, level in others, where the great river basins extended themselves—which were the chosen hunting and fishing grounds of an almost innumerable number of tribes.

The degree of civilization, or, more accurately speaking, of savagery which characterized these as a whole necessarily varied to a great extent in the case of each particular tribe. Nevertheless, from the comparatively high culture of the Incas down to the most intellectually submerged people of the forests and swamps, there were certain characteristics held in common by all. This applied not only to a marked physical likeness which stamped every dweller in the great Continent, but to customs, religious ceremonies, and government as well. Concerning the origin of the South American Indians interminable disputes have now raged for generations, but that in the case of all the various tribes the origin was the same has never, I think, been controverted. The most common theory concerning the origin of the South Americans is that this was Mongolian.

This idea would certainly seem one of the most feasible of the many put forward. Those who have delved sufficiently deeply into the matter have found many striking analogies in customs, religious ceremonies, and even in language between the inhabitants of South America and those of Eastern Asia; and there are even those who assert that the similarity between the two peoples extends to the designs on domestic pottery. The majority of those who have devoted themselves to this subject of the South American aborigines have been obliged to work largely in the dark. Considering the great extent of the ruins bequeathed by the Incas to the later ages, it might be thought curious that so few precise data are available. The reason for this lies in the zeal which the conquistadores displayed in the stamping out of the various pagan religions. No sooner had the Spaniards obtained possession of the chief cities of the Incas than every symbol, image, or, indeed, any object suggestive of sun-worship or anything of the kind, was smashed into fragments, and every trace of its significance so far as possible obliterated....