Sophisms of the Protectionists 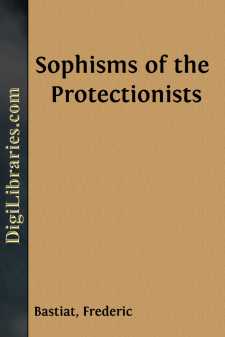 A previous edition of this work has been published under the title of "Essays on Political Economy, by the late M. Frederic Bastiat." When it became necessary to issue a second edition, the Free-Trade League offered to buy the stereotype plates and the copyright, with a view to the publication of the book on a large scale and at a very low price. The primary object of the League is to educate public opinion; to convince the people of the United States of the folly and wrongfulness of the Protective system. The methods adopted by the League for the purpose have been the holding of public meetings and the publication of books, pamphlets, and tracts, some of which are for sale at the cost of publication, and others given away gratuitously.

In publishing this book the League feels that it is offering the most effective and most popular work on political economy that has as yet been written. M. Bastiat not only enlivens a dull subject with his wit, but also reduces the propositions of the Protectionists to absurdities.

Free-Traders can do no better service in the cause of truth, justice, and humanity, than by circulating this little book among their friends. It is offered you at what it costs to print it. Will not every Free-Trader put a copy of the book into the hands of his Protectionist friends?

It would not be proper to close this short preface without an expression on the part of the League of its obligation to the able translator of the work from the French, Mr. Horace White, of Chicago.

This compilation, from the works of the late M. Bastiat, is given to the public in the belief that the time has now come when the people, relieved from the absorbing anxieties of the war, and the subsequent strife on reconstruction, are prepared to give a more earnest and thoughtful attention to economical questions than was possible during the previous ten years. That we have retrograded in economical science during this period, while making great strides in moral and political advancement by the abolition of slavery and the enfranchisement of the freedmen, seems to me incontestable. Professor Perry has described very concisely the steps taken by the manufacturers in 1861, after the Southern members had left their seats in Congress, to reverse the policy of the government in reference to foreign trade. He has noticed but has not laid so much stress as he might on the fact that while there was no considerable public opinion to favor them, there was none at all to oppose them. Not only was the attention of the people diverted from the tariff by the dangers then impending, but the Republican party, which then came into power, had, in its National Convention, offered a bribe to the State of Pennsylvania for its vote in the Presidential election, which bribe was set forth in the following words:

"Resolved, That while providing revenue for the support of the General Government by duties upon imports, sound policy requires such an adjustment of these imposts as to encourage the development of the industrial interests of the whole country; and we commend that policy of national exchanges which secures to the workingmen liberal wages, to agriculture remunerative prices, to mechanics and manufacturers an adequate reward for their skill, labor and enterprise, and to the nation commercial prosperity and independence."—Chicago Convention Platform, 1860....