Something of Men I Have Known With Some Papers of a General Nature, Political, Historical, and Retrospective 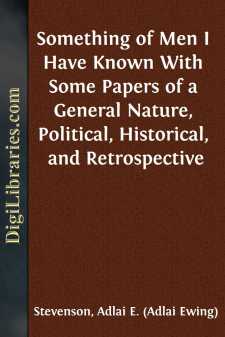 I ON THE CIRCUIT DEVELOPMENT OF THE COUNTRY AFTER THE CIVIL WAR—SLAVERY THE APPLE OF DISCORD BEFORE THE WAR—LINCOLN AS A COUNTRY LAWYER—SOCIABILITY OF THE LAWYERS OF THE PERIOD—THEIR EXCELLENCE AS ORATORS—HENRY CLAY AS A PARTY LEADER—EULOGIUMS ON LAWYERS—LINCOLN'S ADMIRATION FOR GENERAL WINFIELD SCOTT—THE WRITER'S ADDRESS ON THE LAW AND LAWYERS.

The period extending from my first election to Congress in 1874, to my retirement from the Vice-Presidency in 1897, was one of marvellous development to the country. Large enterprises were undertaken, and the sure foundation was laid for much of existing business conditions. The South had recovered from the sad effects of the Civil War, and had in a measure regained its former position in the world of trade, as well as in that pertaining to the affairs of the Government. The population of the country had almost doubled; the ratio of representation in the Lower House of Congress largely augmented; the entire electoral vote increased from 369 to 444. Eight new States had been admitted to the Union, thus increasing the number of Senators from seventy-four to ninety.

The years mentioned likewise witnessed the passing from the national stage, with few exceptions, of the men who had taken a conspicuous part in the great debates directly preceding and during the Civil War and the reconstruction period which immediately followed. By the arbitrament of war, and by constitutional amendment, old questions, for a half-century the prime cause of sectional strife, had been irrevocably settled, and passed to the domain of history. New men had come to the front, and new questions were to be discussed and determined.

To the student of history, the years immediately preceding the Civil War are of abiding interest. In some of its phases slavery was the all-absorbing subject of debate throughout the entire country. It had been the one recognized peril to the Union since the formation of the Government. Beginning with the debates in the convention that formulated the Federal Constitution, it remained for seventy years the apple of discord,—the subject of patriotic apprehension and repeated compromise. The last serious attempt to settle this question in the manner just indicated was by the adjustment known in our political history as "the compromise measures of 1850." These measures, although bitterly denounced in the South as well as in the North, received the sanction in national convention of both of the great parties that two years later presented candidates for the Presidency. It is no doubt true that a majority of the people, in both sections of the country, then believed that the question that had been so fraught with peril to national unity from the beginning was at length settled for all time. The rude awakening came two years later, when the country was aroused, as it had rarely been before, by impassioned debate in and out of Congress, over the repeal of the Missouri Compromise. It was a period of excitement such as we shall probably not see again....