Some Summer Days in Iowa 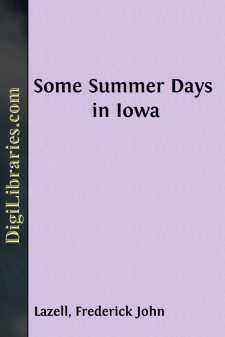 In the old woods road a soft haze hung, too subtle to see save where its delicate colorings were contrasted against the dark green leaves of the oaks beyond the fence. Not the tangible, vapory haze of early morning, but a tinted, ethereal haze, the visible effluence of the summer, the nimbus of its power and glory. From tall cord grasses arching over the side of the road, drawing water from the ditch in which their feet were bathed and breathing it into the air with the scent of their own greenness; from the transpiration of the trees, shrubs and vines, flowers and mosses and ferns, from billions of pores in acres of leaves it came streaming into the sunlight, vanishing quickly, yet ever renewed, as surely as the little brook where the grasses drank and the grackles fished for tadpoles and young frogs, was replenished by the hidden spring. Mingled with it and floating in it was another stream of life, the innumerable living organisms that make up the dust of the sunshine. Pink and white, black and yellow spores from the mushrooms over the fence in the pasture; pollen pushed from the glumes of the red top grasses and the lilac spires of the hedge nettle and germander by the roadside; shoals of spores from the mosses and ferns by the trees and in the swamp; all these life particles rose and floated in the haze, giving it tints and meanings strangely sweet. When a farmer's buggy passed along the old road the haze became a warm pink, like some western sky in the evening, slowly clearing again to turquoise as the dust settled. Viewed in this way, the haze became a mighty, broad-mouthed river of life, fed by billions of tiny streams and moving ever toward the vast ocean of the sunlight. Faintly visible to the discerning eye, it was also audible to the attentive ear, listening as one listens at the edge of a field in the night time to hear the growing of the corn. If all the millions of leaves had ceased their transpiration, if this flow of life had been shut off, as the organist pushes in the tremolo stop, the sound of the summer would not have been the same. Something of the strength and joy of the summer was in it. Drinking deeply of it the body was invigorated and the heart grew glad. In it the faith of the winter's buds and the hope of the spring's tender leaves found rich fulfillment. Theirs was a life of hope and promise that the resurrection should come; this was the glorious life after the resurrection, faith lost in sight and patient hope crowned.

Slender white minarets of the Culver's root, rising from green towers above the leafy architecture of the woodland undergrowth and reaching toward the light of the sky, told the time of the year as plainly as if a muezzin had appeared on one of its leafy balconies and proclaimed a namaz for the middle of July. Beholding them from afar, honey bees came on humming wings for the nectar lying deep in their tiny florets. Eager stamens reached out far beyond the blossoms to brush the bees' backs with precious freights of pollen to be transported to the stigmas of older flowers. Playing each its part in the plan of the universe, flower and insect added its mite to the life and the loveliness of the summer. From the sunshine and the soil-water the long leaves manufactured food for the growth of the plant. Prettily notched, daintily tapering, and arranged in star-like whorls about the stem, they enhanced the beauty of the flowers above them and attracted the observer to the exquisite order governing their growth. When the leaves were arranged in whorls of four, the floral spires were quadruple, like the pinnacles on a church tower; if the green towers were hexagonal, then six white minarets pointed to the sky. The perfect order of the solar system and the majesty of the Mind which planned it, was manifested in this single plant. So does beauty lead the way to the mountain tops of truth. By the road of earthly beauty we may always reach religion and truth is ever beckoning us to new and nobler visions....