Some Spring Days in Iowa 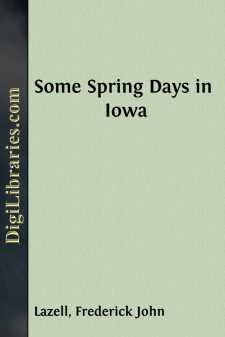 IV. APRIL—BUDS AND BIRD SONGS “Has she not shown us all?From the clear space of ether, to the smallBreath of new buds unfolding? From the meaningOf Jove’s large eyebrow, to the tender greeningOf April meadows?” “And whiles Zeus gives the sunshine, whiles the rain.”

A strong southeast wind is blowing straight up the broad river, driving big undulations up the stream, counter to the current which, in turn, pushes at the base of the waves and causes their wind-driven crests to fall forward and break into spray. The whole surface of the river is flecked with these whitecaps, a rare sight on an inland stream but characteristic of April. We sit on a ledge of rock high up the slope of the cañon and listen as they break, break, break. We may close our eyes and fancy we are with Edmund Danton in his sea-girt dungeon, or with Tennyson and his “cold, gray stones,” or with King Canute and his flattering courtiers on the sandy shore. But a song sparrow with his recitative “Oleet, oleet, oleet,” followed by the well-known cadenza, dispels the fancies and calls our attention to himself as he sits on a hop hornbeam and sings at half-minute intervals. The wind ruffles his sober coat of brown and gray and he looks like a careless artist, thrilling with the soul of song.

Notwithstanding the high wind there is a heavy haze through which the sun casts but faint shadows. Across the white-flecked river the emerald meadow rises in a mile long slope until it meets the sky in a mist of silver blue. To the right a big tract of woodland is haloed by a denser cloud of vivid violet as if the pillar of cloud which led the Israelites by day had rested there; or as if mingled smoke and incense were rising from Druid altars around the sacred grove. As a matter of fact, it is a mingling of the ever increasing humidity, the dust particles in the air and the smoke from many April grass fires. To the left of the meadow there is a sweep of arable land where disc harrows, seeders, and ploughs are at work. The unsightly corn stalks of the winter have been laid low, the brown fields are as neat and tidy as if they had been newly swept; and this is Iowa in April.

Up and down the river the willow leaves are just unfolding, bordering the stream with tender green. The tassels of the pussy willows, which were white in March, are now rosy and gold, due to the development of the anthers. The aspens at the front of the wood are thickly hung with the long yellowish-white tassels and look like masses of floss silk among the tops of the darker trees. A big cottonwood is at its most picturesque period in the whole year. The dark red anthers make the myriads of catkins look like elongated strawberries. Tomorrow, or the next day, these red anthers will break and discharge their yellow pollen and then the tassels will be golden instead of strawberry-colored. Spring seems to unfold her beauties slowly but she has something new each day for the faithful.

The ash, the hackberry, the oaks, the linden, the locusts on the hill and the solitary old honey-locust down by the river’s brink are as yet unresponsive to the smiles of spring. The plum, the crab apple, the hawthorn and the wild cherry are but just beginning to push green points between their bud scales. But the elms are a glory of dull gold; every twig is fringed with blossoms. The maples have lost their fleecy white softness, for the staminate flowers which were so beautiful in March have withered now. But the fruit blossoms remind us of Lowell’s line, “The maple puts her corals on in May.” In Iowa he might have made it April instead of May. But that would have spoiled his verse.

For long we sit and drink in the beauty of the scene. Meanwhile the birds on this wooded slope are asking us to use our ears as well as our eyes. Such a mingling of bird voices! The “spring o’ th’ year” of the meadow larks and the mingled squeaks and music of the robins are brought up by the wind from the river bottom, and the shrill clear “phe-be” of the chickadee is one of the prettiest sounds now, just as it was in February....